Home > 2010 > April
DisabilityApril 07, 2010
What's it like to have a sister with Down syndrome?Amy Julia Becker
expand 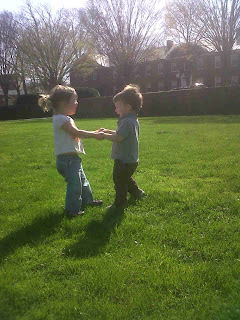 When I was pregnant with William, I thought a lot about what it would be like for him to have an older sister with Down syndrome. I thought about how "good it would have been" for me to have had a sibling with Downs. I assumed she would teach him things like patience, or to have less concern for social status or appearance. I guess I thought it would be a challenge for him. And maybe someday it will be.

But once William was born, I kind of forgot those questions. Penny was so clearly his big sister: 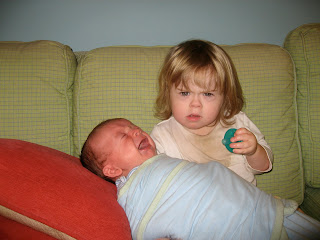 And they were so different–she ate solid food and went to school and talked to me. He cried a lot. They're more alike now, and William is working hard on catching up to his sister in walking up stairs and singing songs and demanding parental attention. But when a friend asked me last week how I thought he would be influenced by her, and particularly by the fact that she has Down syndrome, I didn't really have an answer.

The next day, our babysitter extraordinaire took the kids to a local farm. When they got home, I heard all about it from Penny: "Went to the farm. I was a little bit nervous. William scared. I helped him."

The official story: Our babysitter encouraged Penny to feed the goats. She put Penny's hand in her own, put feed on it, and together they offered the food to the goats until Penny felt comfortable doing it herself. William held back. But once Penny had gained her own confidence, she coaxed William over. She told him he didn't need to be nervous. She put her hand under his, put feed in his hand, and helped him, just as she had been helped. Or, again, as she said, "William scared. I helped him."

I don't know what the future will hold for these two. I do know that as soon as William wakes up he asks for her. I know that she bosses him around and tattles on him and gives him a kiss if he gets hurt, that he steals her bear and laughs about it. I know that they hold hands in the backseat of our car. I know that he's her little brother and she's his big sister. I know they love each other a lot. And I think that's all I need to know for now.

Down Syndrome; Family
April 07, 2010 at 2:57 am
To add a comment you need to be a registered user or Christianity Today subscriber.

What's it like to have a sister with Down syndrome?