I have a new post at her.meneutics called, "Yoga, an Exercise in Discernment." It begins:About 16 million adults in the United States practice yoga — an increase of 85 percent from 2004 to 2008 — and the Los Angeles Times reports that both Christian and Jewish groups are incorporating the Eastern meditation practice into their respective faith tradition. Explicitly Christian yoga classes, such as Laurette Willis's PraiseMoves, seek to "transform your workout into worship!" I've practiced yoga for over six years now, but haven't sought out a Christian class, instead being content to bring my faith to the class I attend. This exercise in Christian discernment has strengthened both my body and my spirit. 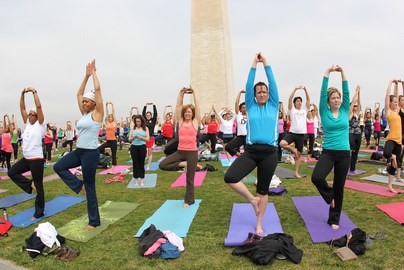 I had two reservations when I began practicing yoga. One, I don't like trying new things, and the thought of contorting my not-so-flexible body in front of others made me nervous. Two, I knew that yoga had Eastern origins, and didn't want to turn exercise into an unwitting endorsement of Hinduism. But the class was free, and I wanted to be more willing to try new things, and I figured my faith could withstand one yoga class. So I went.

Yoga
April 23, 2010 at 6:55 am
To add a comment you need to be a registered user or Christianity Today subscriber.

Yoga and Christianity: What's the Deal?

Yoga and Christianity: What's the Deal?