With the move to Beliefnet, I decided to start a weekly guest blog post called "Perfectly Human." This weekly feature is intended to provide a picture of life with a disability in all its possibilities and limitations, gifts and struggles. The title of this feature comes from the Greek word telos, which can be translated as "perfect" but which also can be defined as, "the end for which it was created."

People with disabilities are just as human as anyone else–flawed and gifted, beloved and broken. They are "perfectly" human, which is to say, created with a purpose. This space is intended to convey the things that connect us as human beings, things that go beyond our perceptions of able/disabled. And this space is intended to suggest ways in which individuals with disabilities can, at least sometimes, help individuals without disabilities to understand their own humanity.

My friend Margot Starbuck, author of Unsqueezed, and The Girl in the Orange Dress, agreed to write the first post: 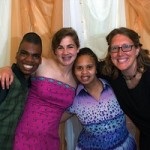 Tuesday morning I spoke to a local mother's group.  After dropping babies and toddlers off in childcare, about fifty or sixty women gathered around tables for orange juice, tasty treats and an inspirational word from yours truly.  Having been invited to speak about the importance of motherhood, I gladly obliged.

When I told the women how critical they were during their children's developmental years, they nodded in agreement. When I exhorted them to help their children notice their feelings, they scribbled notes in journals.  Strong eye contact, raised eyebrows told me they were tracking along dutifully.  For the briefest moment, I felt like I was really going to be instrumental in changing the lives of women and children, possibly for generations to come.

Once I got my wits back, I knew enough to doubt that a week from now they'll remember any of my wise words.

(Sigh) "Ahhh…It's okay to let other people see who I really am."

Hear me: I'm as tempted as anyone else to pose, to wear masks, to put on a happy face.  Just like everybody else, I want to communicate to others that I've got my act together.  I probably spend more energy on this than I'm even able to admit.

In my best worst moments, though, I resist that temptation.  This isn't because I'm particularly noble.  Not at all.  Rather, I choose to take the mask off, to let people see who I really am, because I've experienced something even better.  I've felt the relief that these overwhelmed mothers felt when I have encountered others who were willing to tell the truth.  I've caught a glimpse of the kind of freedom that's possible when the mask is removed.  I've been blessed and inspired by people who are just fine with being themselves.

Don't you just wanna run out and get you some o' dat?!

Here's my secret: I received this fantastic gift from a number of teenage and adult friends who live with various cognitive and physical disabilities.

For years I couldn't quite put my finger on what was so entirely lifegiving about being with these friends.  I'd heard people say things about individuals with cognitive disabilities being "angelic."  Yet with the understanding that they are as human and fallen as I am, I knew my friends weren't saints.  "What is it about these relationships," I searched, "that is so very appealing and even holy?"

Finally, recently, I got it.

It can't be seen under a microscope or measured on any standardized test.   Rather, it is a wily thing called "transparency".

Don't worry, my friends aren't invisible.  Quite the opposite, in fact!  Less driven to hide behind masks that cover up who they really are, often seeming more comfortable in their own skin than a lot of other folks I know, these friends bless me, and bless others, by being who they really are.

I saw it with my own eyes, about six weeks ago, when our community held a big dance for friends with and without disabilities.  As I watched a lot of the teen- and college-aged and other adult volunteers dancing, I witnessed people who were, at last, tasting freedom.  Because everyone who'd walked in the door that evening had been entirely accepted by their friends with disabilities, those in attendance experienced what pastor Tim Keller calls, "blessed self-forgetfulness." Less concerned with impressing others than I am, these friends of mine create a new kind of reality, a kingdom space, where people can

be who they really are.

The converse, of course, is also true: people I know who wear a lot of masks, who pose, who try to hide who they really are, can often be pretty critical of others.  Yet what I experience among many of my mask-less friends is both an acceptance of self and an acceptance of other that makes me breathe a deep sigh of relief.

"If she can be who she really is, than–at last–I can be who I really am."

Disability; Motherhood
July 01, 2010 at 9:29 pm
To add a comment you need to be a registered user or Christianity Today subscriber.