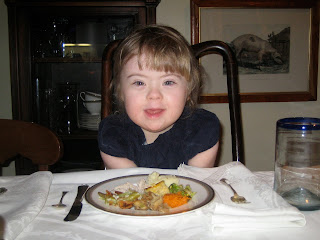 About once a month, Penny and I take a special trip to Panera for lunch. Tuesday was the day. "Let's go out to lunch," I said.

We stood in line, and I picked Penny up so she could see over the counter. The woman taking our order beamed. Penny said, "Hi."

After I paid, she said, to Penny, "My sister's name is Doha. You remind me of her."

Time was short–long line of people behind us–and I think she needed to confide in us as quickly as possible. She handed Penny a free chocolate chip cookie, and we made our way to a table by the window.

I don't know if she remembered three years earlier, the first time I had brought Penny to Panera. She had taken our order then, too, and afterwards she approached our table and told me about her sister back in Morocco, her sister with Down syndrome. "I miss her so much," she said. "I just love looking at your baby."

Until that point, Down syndrome had been something that set us apart. The one-in-a-thousand, doesn't-happen-to-anyone-else, special, unique, different part of our family. But that day, Down syndrome brought us together. It crossed over the cultural, economic, racial and linguistic differences. She trusted that I would understand her love for her sister. She trusted I would have a sense of why she missed her so much. For a moment, I had more in common with a Moroccan woman working at Panera than I did with anyone else in that restaurant.

There's a wonderful movie called Praying with Lior, a documentary about a boy with Down syndrome preparing for his Bar Mitzvah. His older brother says something along the lines of, "When I go to college, I'll have to stay close by. Not because Lior needs me. Because I need him. He's my best friend." I suspect the woman in Panera would have known exactly what he meant. I suspect that William will feel the same one day.

It's one more gift that Penny gives me, the gift of relating to people who are different, the gift of understanding their love.

Down Syndrome
March 26, 2010 at 4:16 am
To add a comment you need to be a registered user or Christianity Today subscriber.

My Sister's Name is Doha

My Sister's Name is Doha