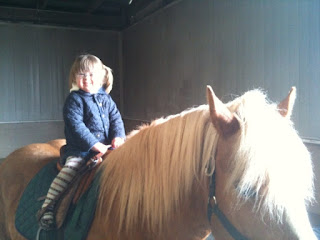 As readers of this blog already know, Penny attends an inclusive preschool. There are about 14 kids in the class–eight who are "typically-developing" and six with special needs. On Sunday, it was Sarah's (I've changed her name) birthday, and she had a "pony party" with all the kids from her class at school.

I knew Penny would be afraid of the pony, and that I wouldn't be able to coax her into it. So the party fell to Peter. As he described it, after the arts and crafts time, everyone started toward the riding ring. Penny promptly declared, "I need to go potty!" A classic stalling tactic. She used the potty, came outside, and said, "I need to go potty!" After round two, they went to the ring. Penny watched all her friends ride, and as she told me later, "I was still a little bit nervous." (According to Peter, as he put her on the horse her whole body was shaking with fear.)

Another mom had suggested that Penny put on a happy face. She clenched her teeth and grinned, shaking all the while, until she decided it was really fun after all. "I want to ride a pony with you, Mom!" she told me when she got home. "I want to do it again."

It was a victorious day for us as a family. But it was a hopeful day for reasons beyond our immediate context. The family throwing the party have a typically-developing child. But they chose pony riding because they wanted the party to include everyone in Penny's class. One little girl has trouble walking, and they knew that bowling or a Bounce-U wouldn't work for her. Another little girl has an egg allergy, so they had a vegan cake. When Arden's mom realized that her daughter could eat cake, her eyes welled up, "She's never been able to eat cake at a party before."

My friend Margot Starbuck (who blogs at Thoughts on Hair, Shoes & Other Stuff) wrote today with a very different story:

Though I'm seldom at a loss for words, I think I was so shocked when drunken fans at a lacrosse game started calling the Rollins "Tars" the "tards" I was completely speechless.

I did not WANT to be.

The only redeeming thing about the situation was that after the idiots said that stupid thing loudly 9 or 10 times, it had become apparent to all present who it was that was really socially/emotionally/intellectually/spiritually challenged.

I feel like I've read on your blog about one encounter you've had like this, but if you'd write again to equip us all I would SOOOOO welcome it.

Honestly, I don't think there's much that can be done or said in that moment. I wish I could come up with even a pithy response, but all too often I find myself speechless at the insensitive language of people around me. The only response I can muster is longer and deeper: friendship. I can't imagine that anyone in Penny's class, if they continue to cultivate friendships with one another, could participate in the chants described above.

In fact, as I was putting her to bed last night, Penny said, "Mom, I rode the pony today!"
"I know sweetie. You did a great job."
She started clapping her hands. "Mom," she said, "they all cheered for me. All my friends cheered for me."

Other posts related to this topic: "Movies and the R-Word""Our Daughter Penny and the Word Retarded" "Finding the Right Words to Talk About Disability" "The Limitations of Language"

Down Syndrome; Swearing and Profanity
March 30, 2010 at 3:14 am
To add a comment you need to be a registered user or Christianity Today subscriber.

They Cheered For Me

They Cheered For Me