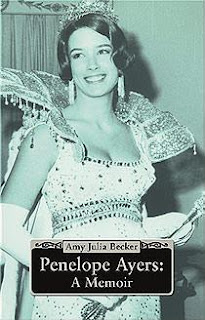 Penelope Ayers is now available on Kindle. Unfortunately, the Kindle edition is not in the same place as the paperback. Go figure (and if any of you are tech savvy and know how to fix this discrepancy, please comment!).

And to read a new review, and get introduced to an interesting blog (Holy Vernacular!) click here.

I also realized that I've never published here an old review of Penelope Ayers that originally appeared on the website of the Lawrenceville School: Anyone who is even mildly drawn to those old subjects like life and death, duty and desire, God and family, or to more currently popular dyads like cancer and crisis or conscience and career, should read Penelope Ayers: A Memoir by Amy Julia Becker. The book tells the story of the last years of a tragic and intriguing woman who faces an inescapably premature death. The book's formal shape is a memoir, and our author/narrator is always present – keen-eyed, chatty, curious, needy, dutiful, and funny. Her own struggle and development as a person/character is the primary vehicle of the book's narrative power.The story briskly hop-scotches its way through the clinical nightmares of an unfolding terminal disease: CAT scans, PET scans, surgeries, alpha-fetoprotein tumor markers, specialists, diagnoses, misdiagnosis, and the slow degradation of a human body. All the way, this grim decline is entwined in a rich back-story of a large, complex and conflicted New Orleans family that would, I believe, reassure the likes of Tennessee Williams that his, and America's, flagship "third-world" city hasn't been completely lost to the good-intentioned social engineers of post-Katrina relief squads. These people drink, dress-up, smoke and emote, and say things such as, "I'd rather not know that my break tags have expired." (The reader has to provide the Blanche DuBois drawl.)The book's cover, an old society flash photo of a catalytically gorgeous woman sceptred and dressed in the ceremonial gown of a Mardi Gras queen, casts an eerie shadow across the story. Was she even then a sort of sacrifice? Yet things never get slushy or self-obsessed, as they easily might. Perhaps that's because the narrator, Amy Julia, whose connection to the story is as the young bride of the unfortunate son of the dying woman, is an outsider from Connecticut. As she becomes more and more drawn into Penelope's life (with all its human secrets) and Penelope's death (with all its public humiliations) she increasingly needs to explore her own place in this most extraordinary and most common of events. She does this well, through a fine skill at dialogue. Conversations crackle with energy, and the story moves forward borne largely on verbal exchanges of a family in crisis. When she stops to reflect or explain, it's done with a careful severity that leaves the reader wishing for more rather than less.Yet Penelope Ayers: A Memoir has everything going against it. It's a first book, a family memoir (ho-hum), about white Protestant patricians facing a medical horror that is faced by many others. It's privately printed (as was James Merrill's and Jorge Luis Borges' first books), and, at least in this instance, it's reviewed by a friend. Living across the parking lot from the author and her husband as I do, it's hard to read her book with the same comfortable detachment I would a book off the rack at Barnes & Noble. But it strikes me that this one is much better than many I might find there. It is a skilled and professional job of telling a painful, yet redeeming story. It is surprising and lively. And yet it is strange and mysterious to me in a way I cannot explain, and may not want to.Somewhere at the start, the author quotes from the parchment scroll invitation received by her mother-in-law to be the Queen of the 1968 Atlanteans Ball on Fat Tuesday. After some mock bombast about "puissant Monarchs" and "royal Consorts," the invitation finishes with this admonishment: "Fail not in this your bounden duty." Bounden? The word, clear enough in its meaning, drove me to my online Oxford English Dictionary. The most recent citation – in this sense – is from 1844. But its etymology appears to be a corruption of an older statement of promise, "bond and duty." And its currency in the language apparently springs from the Anglican Book of Common Prayer, whose haunting liturgy features repeatedly in the last chapters of Penelope Ayers. The line in the prayer book of 1559 is from the communion service and it goes, "We beseche the to accept this our bounden duty and seruice."So that was it – the mysterious quality of this memoir of a Connecticut woman drawn to the deathbed of a Mardi Gras queen (and the mother of her own husband and grandmother of her own children). This is the strange sub-textual tenor that informs the narrator's voice inPenelope Ayers and seems so different from most contemporary literary acts: something to do with "a bounden duty and seruice."

Death
May 04, 2010 at 3:18 am
To add a comment you need to be a registered user or Christianity Today subscriber.