Every so often I happen upon a blog of someone who epitomizes stay-at-home-mom. She bakes fresh bread. She thinks of creative art projects with her children. She decorates her home, with her children, for every holiday. She definitely has a garden with both flowers and vegetables. And a compost bin.

Yeah, so, that's not me (see "I Failed as a Gardener" for proof). But every so often I aim for those types of interactions with my children.

Take last Wednesday, for instance. We had friends coming over for dinner, so I decided Penny and William and I would make brownies. It started off well. We measured and stirred and poured. We talked about why things melt as the chocolate disappeared into the warm butter. We watched all the ingredients become dark brown as we mixed them together. And we had a great time licking the bowl: 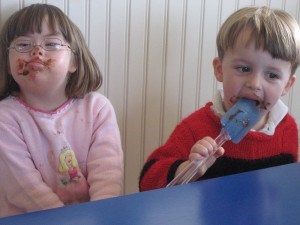 We popped those brownies in the oven and then, with Marilee asleep upstairs and the sun beaming outside, we headed to the lawn. And then to the bikes. I haven't been outside with our kids on bikes in months. And back then, it was an exercise in insanity for everyone. Neither of them could pedal. Neither could steer. Peter and I had a theoretical idea that kids enjoy riding bikes even though our kids (and we) clearly didn't enjoy sitting still on the pavement one bit. But over the course of the past few months of winter, they've grown up.

William couldn't quite get his feet to pedal and his hands to steer at the same time, but he had a fun time trying. With my hand on the steering contraption he moved forward and enjoyed it.  Then came Penny. She climbed on. And she pedaled. And she steered. And she could DO it! I remembered back to reading a book a few months after Penny was born. It had statistics about kids with Down syndrome, and it informed me that kids with Downs ride a two-wheeler on their own, on average, at age nine. Back then, the news left me despondent. In the course of the five years since then, however, I've learned to let go of milestones and timelines and let Penny be who she will be. In letting go of expectations, it opened me up to the possibility of delight.

Of course, this little bike has firm training wheels, and although Penny's mastered pedaling and steering, she hasn't quite figured out the brakes yet (as evidenced a few days later when her first trip down a hill ended up in a crash onto a neighbor's lawn and another unforgettable moment when, after we dried her tears, she said, "I want to try again"). Maybe it will take four more years before she's riding a two-wheeler. That's not the point. The point is, Penny surprised me by her ability. And we all celebrated.

From there we visited my grandmother who lives next door. We picked some daffodils. And I was feeling like one of those highly accomplished moms I mentioned earlier. Until we walked in the door to a rather unfortunate scent: 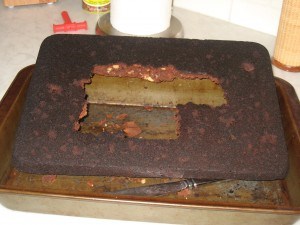 Not just slightly burned. Inedible. Hard as a brick.

I had to laugh. And I had to remind myself of something I've learned before. I will never be a perfect mother. I'll never be able to juggle cooking and cleaning and playing with kids and writing and all the rest. And for this, I am grateful. Because somehow, letting go of the need to do everything right opens me up to the possibility of the unexpected joy of watching my daughter learn to ride a bike.

As it turned out, the people who came over for dinner brought their own homemade chocolate cookies. We didn't need the brownies after all.

Family
April 05, 2011 at 4:01 am
To add a comment you need to be a registered user or Christianity Today subscriber.