I was asked to participate in the current Patheos Book Club discussion about The Language of Science and Faith. In addition to my own reflection, posted below, I invite you to read an excerpt, read an interview with Karl Giberson, and look at other reviews of the book itself. Here's my take: 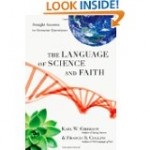 Sometimes I forget that there are large portions of the Christian population who don't believe evolution happened, who think the earth is 4,000 years old, and who assume the universe and all that is in it was created in seven 24-hour days. Of course, when I say I forget, what I really mean is that I don't encounter many people with these views. Even though we all call ourselves Christians, and we all say we read the Bible as the Word of God, I tend to dismiss those views altogether.

Karl Giberson and Francis Collins are two Christian scientists who believe in evolution, an old earth, and a long process of creation. And they treat Christians who understand the Biblical texts differently with great respect. The Language of Science and Faith was written with Biblical literalists in mind, and as a result I found myself skimming through the chapters that defend various aspects of evolutionary biology and geology. I don't need to be convinced. Still, the tone of the book—offering gentle but firm correctives and explanations for the compatibility of Scripture and scientific discovery—humbled me.

Giberson and Collins combine their own scientific knowledge with orthodox theology and a helpful history of ideas in order to advocate for "theistic evolution," a view that asserts God's hand and sovereignty (although perhaps not God's control) over creation while simultaneously affirming the freedom of creation to evolve. They call their view Biologos, "a holistic explanatory scheme promoting the belief that evolution is a correct science, and that it effectively describes the method by which God created the panorama of life forms that makes the earth so interesting."

It is easy for me to accept a biological explanation of things, but the philosophical and theological implications of evolution have troubled me for a long time. What do we make of the apparent wastefulness of creation? I think, for instance, of the 25% of pregnancies that end in miscarriage. What do we make of the apparent cruelty of nature? The mothers who eat their young? The earthquakes and tsunamis and hurricanes that wreak destruction? If evolution is an undirected process of mutation over time, does that mean that life is purposeless? And how do we understand the theological concept of being created in the image of God if we originated from a common ancestor with all other forms of life, including plants?

To some degree, Collins and Giberson address these issues. I would have preferred a book that spent more time on these questions than on defending the science itself, but that's really an unfair complaint given what this book set out to do. They propose that "God has endowed nature with a degree of freedom." Just as human beings have "free will," so nature "has an inherent liberty… the unfolding patterns of nature are not restricted to machine-like, predetermined paths."

On the question of the creation of human beings, Collins and Giberson basically shrug their shoulders. They believe God did it, but what exactly that means remains unknowable from a scientific point of view: "the Genesis account does not tell us how God created—only that God did create and that human beings are a part of God's plan and not an accident." Although I tend to agree with their conclusions, again I wish they had spent more time offering insights into the distinctiveness of human beings within God's creation.

I recommend this book for any Christian who struggles to understand the Biblical account of creation and the reigning biological explanation for our environment. The Language of Science and Faith is well-written. It gives enough detail to answer plenty of basic questions, but it never gets too technical (I only took two years of high school science, so if I can follow along, so can most others). And it is written with graciousness and thoughtfulness. Let's hope that Christians across the spectrum of belief are willing to engage these ideas with equal humility and respect.

Biology; Evolution; Francis S. Collins; Intelligent Design; Technology
April 08, 2011 at 9:39 am
To add a comment you need to be a registered user or Christianity Today subscriber.

Creation and Evolution: What Must Christians Believe?

Creation and Evolution: What Must Christians Believe?