Home > 2011 > April
Half the Church Might Need Another Quarter... (Plus, Book Giveaway...)Amy Julia Becker
expand 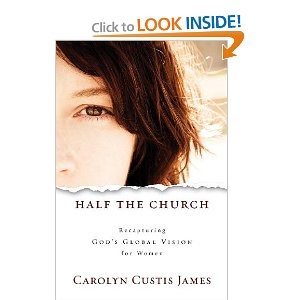 Update (posted April 6): Caryn and Casey have won copies of Half the Church. Thanks to all who participated!

Let's begin with a question: what has been your experience of women in the church? Comment below and enter to receive a free copy of Half the Church.

Carolyn Custis James' Half the Church combines personal anecdotes and stories with Biblical exegesis and exhortation to promote an ancient but renewed vision of Biblical womanhood. I was surprised at how much I needed her reminder that women do not matter due to marriage or childbirth, but rather, women matter because we have been created in the image of God.

James is at her best in engaging the reader with Biblical teaching. Through a lengthy exposition of Genesis 1 and 2, she demonstrates that the command– "Be fruitful and multiply"–cannot mean "have lots of biological children." Jesus, for instance, the ultimate image-bearer, was single and childless. In contrast to traditional readings of the word "ezer," which is used to describe Eve and is generally translated "helper," James demonstrates that the word "ezer" bears greater resemblance to strong leader. Elsewhere the same word is used to describe God himself as a warrior. James uses the Biblical text to challenge the idea that "God gave primary roles and responsibilities to men, and secondary, supporting roles to women." Instead of thinking about the opening chapters of Genesis as a call to procreation, James sees them as a call to leadership as women preach the gospel throughout the world while also speaking out on behalf of women around the globe.

Due to the evangelical nature of her audience, James must begin with a lengthy argument for the equality of women as leaders. In addition to her examination of Genesis, she identifies a host of other Biblical women leaders (though not as many contemporary women leaders as I would have liked) in order to make the claim that all women are designed by God to lead.

But James wants this thread of leadership to be woven into a wider garment. The inspiration for this book came from her own experience reading Half the Sky, a book which details the desperate plight of women around the globe. In Half the Sky, Nicholas Kristof and Sheryl Wu Dun (a husband and wife team) detail horrific stories of degradation and abuse of women around the globe. They also offer hope for eradicating poverty and abuse if women were given power and influence within their respective global cultures. James wants her message of Biblical leadership to extend to these women, and she wants these women to understand that the gospel is good news for them. In James' words, "The Bible's message for women doesn't depend on ideal circumstances, but applies fully to those who live in the brutal outskirts of society where poverty engulfs, education is nonexistent, women's bodies are ravaged, and lives are in constant peril simply because they are female."

Unfortunately, this wider vision for women worldwide gets sidelined amidst the arguments for women's equality and leadership capabilities. It gets further marginalized when James brings up the question of women's ordination. She writes, "I made a conscious decision not to take a public position on the ordination of women. My focus has been on calling women to go deeper in their relationship with God." And yet she also writes, ""God isn't calling men and asking women to hang back. He gives both male and female the exact same identity–to be his image bearers. He gives both the exact same responsibilities when he entrusts all of creation to his image bearers..." Her lack of position on women's ordination seems disingenuous.

In many ways, Half the Church builds a strong foundation. But construction of the building stalls. I'm grateful for the vision of women James offers. She writes with intelligence, force, and in a tone that invites thought and conversation. I only wish she'd given us more.

Again, I invite you to join the conversation by reflecting upon your experience of women within the church. I'll select at random from among those who comment and you'll receive a free copy of Half the Church.

P.S. I will announce the winner on Monday of next week and here's the promotional video for the book for anyone interested:

Women's Rights
April 06, 2011 at 4:03 am
To add a comment you need to be a registered user or Christianity Today subscriber.

Half the Church Might Need Another Quarter... (Plus, Book Giveaway...)