Sara Hagerty is a friend through marriage–her husband and mine were housemates for two years in college. But in recent years the bond has grown stronger as both of us have found ourselves with families that are less conventional than our peers. Sara and Nate adopted Eden and Caleb three years ago from Ethiopia. They are returning tomorrow from another trip to Africa–this time Uganda–and they are returning as a family of six, with Lily and Hope now under their roof. Sara's blog, Ever Bitter Thing Is Sweet, traces their journey. I asked her to explain in a guest post today why they chose to change their childrens' names. In "My Garden of Delight," she explains:

She barely smiled beneath the knit cap – the one we later realized served to conceal her abnormally-small head. Her picture hid what her body wore.

At three and a half, she was seventeen pounds. The heart full of life which surfaced months later, was trapped in a body craving nourishment it's three years had yet to see.

So we did what any parent in our shoes does – we studied that picture and asked Him who she was. What some might consider an unusual way to enter motherhood seemed not all-too-different to me than carrying her in my womb – except my ultrasound revealed defined features and skin and life already world-exposed.

The name we had picked for her, almost a year earlier, didn't quite fit the evidence which started to spread across our refrigerator as friends and other adoptive parents visited our little Meskerem. Most all of the pictures of her, but one, showed a discontentedness which we struggled to decipher. Was she shy and quiet or was this child simply unhappy?

She certainly had reason to be, but children are resilient. Orphanages are filled with five-and-unders who haven't yet realized that kisses on boo-boos from nannies during the rare times when they aren't holding the babies isn't quite the same as a mother's lips against broken skin. Nothing feels broken to a child until their bodies keep growing and their hearts are left behind, stunted.

Could she really know her loss at three?

Adoption, to us, is an offering of new life. In both the physical and the spiritual, a child is grafted in to something otherthan from which they began. It is a holy regeneration.

But, as we've both seen in our own lives, restoration – at its core – is not an erasing of all that was broken but a broken wall rebuilt. And the broken pieces come together to become a fortress by which identity is formed.

By giving our children new names upon their joining our family, we are not negating where they came from. We are making an Ebenezer – a pile of stones, a marker – out of those broken years. It's an indicator of new with the understanding that new can't be whole without the old being healed.

You see, we decided to call her Eden, long before we saw her face.

I sat in a meeting where the speaker referenced this name and like a bell chime in my spirit I knew this is it. I couldn't get the words out fast enough before Nate said "I think that's her name."

It means garden of delight.

Isaiah 51:3 says "He will make her wilderness like Eden."

But the thin thread which connected our hearts to the heart of the orphan was, at times, a dark black cloud over our daily lives.

Wilderness. We'd come to know it intimately. Life didn't quite pan out how we'd expected and when the bottom began to fall out He began to stir our hearts for Him. And with that, came a stirring for something on His heart: those whose early years contained more brokenness than our thirty years.

But the message through our dark hour was the same one He was giving us for the orphan: It's not over. Ashes come before beauty. And the Father loves to turn a story around for His glory.

"Eden" fit the child whose hopeless existence was offered a way out.

And, when we finally saw the face of the one who would be our Eden – and her dark circles and seeming heavy spirit spoke anything but delight – we asked the Father to burn her name deep within her.

Then, as the weeks and months unfolded before we went to pick up her and her brother, we moved from pictures like this: 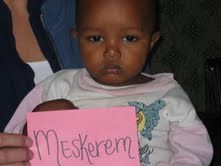 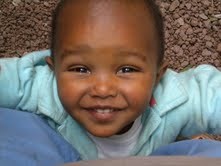 Light sparkled over her once-shadowed face. It was as if just the promise of a new beginning took root in her frame. She began to take on her name.

And the first night I held her tiny body in my arms and lowered her into the bath, I watched a delight erupt within her, one like I didn't know was possible from the girl whose pictures I'd studied. She squealed and squirmed, lost in bubbles and water as if her body was finally released to rest ... and play.

She was (and is) our garden of delight. He couldn't have picked a better name for her. She became what He breathed out to us a year earlier.

While the Father may allow wilderness, it is never the end of the story. It's a passageway to Him. And, when my little girl dances a mix of Ethiopian shoulder shrugs interrupted by pirouettes and plié's she learned in ballet – all while singing "How Great Is Our God" – I can't help but want more of this Man who called her by name, even when her life spoke another word. 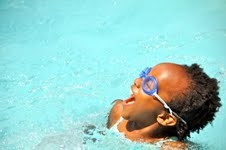 A picture of Eden from just this past weekend, compliments of Mandie Joy Photography (http://www.mandiejoy.com/).

Adoption
August 05, 2011 at 7:35 am
To add a comment you need to be a registered user or Christianity Today subscriber.

My Garden of Delight

My Garden of Delight