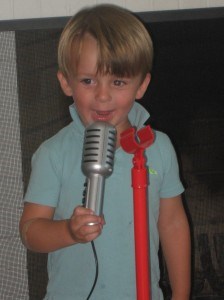 Yes, I have the song lyrics in mind, and yes, that's William on the left with the microphone his great-grandmother gave him for his birthday. We've tried to teach William to use his performance skills to sing "You can't always get what you wa-ant,"  but he's had a hard time appreciating the message. Instead of singing along, he tends to stomp his feet and punch the air and begin wailing. Sometimes he throws things. Other times he pushes me. It's as if his need for whatever he desires–me to drive the car instead of his dad, for instance . . . sitting at the table at the eating nook for dinner instead of the counter . . . eating a cupcake at 7 a.m.–as if his need for those things eclipses any possibility of reason, any language skills he once possessed, and any pretense at maturity.

We never had this problem with Penny. She brings her own challenges, to be sure, but tantrums are not her thing. When she was younger, I would generally distract her from her object of desire, and that was enough to bring contentment. Now, I just need to bring reason to bear. "I know you want to eat a cupcake, but do we eat cupcakes at 7 in the morning?" She laughs and moves on.

But William is a different story. He's stronger. He's not easily distracted. And his favorite sentence these days tends to be, "I DON'T WANT A TIME OUT!" with a pouty lip and a scowl in my (or Peter's) direction.

All we can do is give him harsh choices: "You either go to the counter for your dinner or you go to bed with no dinner right now."

"I repeat. You either go to the counter for your dinner or you go to bed with no dinner right now."

And he says, "I would like to eat my dinner now please," with a sweet voice and a winning smile.

I take solace in the thought that self-control is a virtue and a virtue that will serve William well later in life. Pastor Tim Keller often remarks, in reference to Romans 1, that one of the worst things that can happen to us is for us to get everything we want. It's a reminder that I need the same correction as my son sometimes. Disappointment, self-denial, unfulfilled longing–these things can be blessings from God, reminders that we are indeed human beings. Limited, vulnerable, and dependent upon one another.

I hope that denying our son his every whim is helping him grow up with humility and grace. Meanwhile, we'll keep trying to teach him the song lyrics and hope that eventually he sings along with a smile.

Self-Control
August 09, 2011 at 7:57 am
To add a comment you need to be a registered user or Christianity Today subscriber.

You Can't Always Get What You Want

You Can't Always Get What You Want