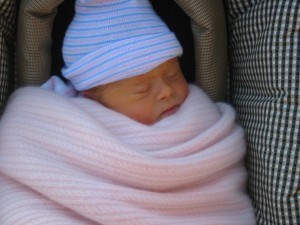 I have a new essay in the December issue of Christianity Today (and if you're a subscriber, be sure to read it in the magazine because it includes two adorable photos of Penny that don't appear online!) "My Perfect Child." In my dad's words, the article is a very abbreviated (he might have used the words "dumbed down," but even if he did, I think abbreviated works) version of A Good and Perfect Gift. Which is true. So if you haven't read the book, you can read the article. And if you have read the book, then pass the article along to a friend.

Our daughter was born at 5:22 P.M. on a Friday afternoon. For two hours, we reveled in the sweetness of new life—her pouty lips and soft skin, her deep blue eyes, her full head of black hair. Then a nurse called my husband out of the room. When Peter returned, it took me a moment to see that his eyes were brimming. "The doctors think Penny has Down syndrome," he told me. And the world began to break into pieces.

A few hours later, a woman was giving birth in the adjoining room. "She's perfect! She's perfect!" they exclaimed, as another baby girl was born.

In those early hours, I came face to face with my unspoken assumptions about my child. I had thought Penny would be just like me—a little girl who walked early and taught herself to read, who won academic awards in high school and got in early at Princeton. Peter, who was a high-school teacher and a varsity athlete, had shared many of those assumptions, expecting to see his competitive spirit in his new daughter.

Despite our Christian faith, we had sub-Christian expectations about our children's appearance, education, and abilities. I would never have stated it so bluntly, but in truth I wanted and even thought I deserved a "perfect" child. God gave me a child with an extra fold of skin around her eyes and floppy limbs and intellectual limitations. I didn't know what to do.

Disability; Holiness
December 02, 2011 at 8:21 am
To add a comment you need to be a registered user or Christianity Today subscriber.

A Good and Perfect Gift, Revisited

A Good and Perfect Gift, Revisited