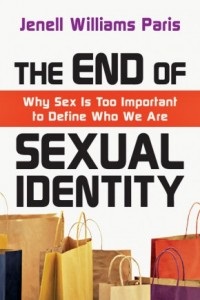 I recently read and reviewed Jenell Paris' book, The End of Sexual Identity: Why Sex is Too Important to Define Who We Are for her.meneutics, the Christianity Today women's blog. I've quoted from and linked to the review below, and I hope you'll take the time to read it and chime in with some comments, either here or at her.meneutics.

But I will also add here that a friend of mine and I were recently talking about this book and about the concept of sexual identity in general. Paris suggests that all people–regardless of how they self-identify sexually–are called to "sexual holiness" before God. For people experiencing persistent same-sex attraction, such holiness will work itself out in a life of celibacy, which, as Paris admits, often seems impossible in our over-sexualized culture (she also notes that sexual holiness often seems impossible for people attracted to the opposite sex, but at least those folks have the chance of marriage). But my friend wondered out loud if the "normative sexual practice" of the New Testament is not marriage, but rather, singleness or celibacy. Jesus was single. Paul was single. Many of the other apostles seem to have been single. Even when Paul writes about marriage, it is as a concession–"better to marry than to burn with passion" (1 Cor. 7:9). What if the church supported single people, regardless of "sexual identity"–in such a way as to praise and uphold their lifestyle as one in keeping with Jesus' own? As The New York Times reported recently, it is difficult to be single and evangelical and find a job as a pastor. If marriage is upheld as the goal for all people rather than as a calling for some, no wonder celibacy sounds absurd. Just a thought.

In the past few months, I couldn't help noticing the flurry of articles about the PCUSA's decision to ordain people in same-sex relationships, the repeal of the military's Don't Ask, Don't Tell policy, the passage of same-sex marriage laws in New York, and the decision of Chaz Bono, daughter of Sonny and Cher, to become a man.

Yet conversations about sex and sexual identity emerge as often around our dinner tables as on the front page of the paper. Recently, a pastor told me about a married member of his congregation who routinely cheats on his wife with other men. A friend described helping a female friend pick out an engagement ring so she could propose to her girlfriend. Another friend sat at our dinner table and talked about leaving the church after years of celibacy because he couldn't deny his gay identity. Jenell Williams Paris, an anthropology and sociology professor at Messiah College, seeks to enter this cultural conversation in her new book, The End of Sexuality: Why Sex Is Too Important to Define Who We Are (InterVarsity Press). Moreover, Paris seeks to change the conversation within the church. Her analysis of contemporary culture offers a helpful aid to Christians trying to wade through the complex issues surrounding gender and sexuality in the modern age.

Celibacy; Same-Sex Marriage; Sexuality and Gender; Singleness
July 19, 2011 at 12:13 pm
To add a comment you need to be a registered user or Christianity Today subscriber.