Home > 2011 > May
A Christian Response to OverpopulationAmy Julia Becker
expand 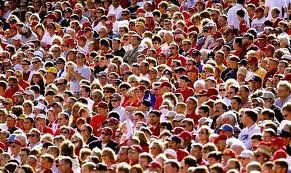 I have a new article on Christianity Today's website, "A Christian Response to Overpopulation." I'm particularly interested in your response to the readers' comments. For instance, is any talk about overpopulation racist in nature? What responsibility do humans have in "controlling" childbirth and family size? How do we understand God's care for the earth and God's promises in light of poverty and human suffering? What practical suggestions would you offer in response to this article?

There was an old woman who lived in a shoe

She had so many children she didn't know what to do

She gave them some broth without any bread

Then whipped them all soundly and put them to bed.

Like arrows in the hands of a warrior are children born in one's youth.

If old nursery rhymes serve as any indication, people have been concerned about overpopulation for centuries. More recently, in 1968, Paul Ehrlich wrote a best-selling book called The Population Bomb. He predicted mass starvation and other calamities as a result of overpopulation, although his conclusions were largely discredited later and his most dire predictions have not come to pass. More recently still, the United Nations revised their population projections for the next century. According to the U.N.'s numbers, the earth's population may reach 10.1 billion people by the year 2100. Justin Gillis and Celia Dugger report in The New York Times, "Growth in Africa remains so high that the population there could more than triple in this century, rising from today's one billion to 3.6 billion … a sobering forecast for a continent already struggling to provide food and water for its people."

Not only does the prospect of billions more people threaten the future health and well-being of many, but women and children face hardship in the present when it comes to childbirth and family size. In Afghanistan, for instance, a woman is 200 times more likely to die in childbirth than to be killed by a bomb or a bullet. Education for midwives, of course, can help alleviate those dangers without decreasing the number of children born. And yet many women in developing countries put their children up for adoption rather than struggle to provide for them at home.According to UNICEF, 90% of the 132 million children classified as orphans worldwide have at least one living biological parent. As families grow, parents often face increasing difficulties as they try to provide for their children's basic needs. In the past, Western nations have offered "family planning programs" as a corrective to population growth, and women in developing nations have responded positively. Many women choose birth control when offered: "Provided with information and voluntary access to birth-control methods, women have chosen to have fewer children in societies as diverse as Bangladesh, Iran, Mexico, Sri Lanka and Thailand."

It seems like a simple problem—too many people—with a simple solution: have fewer children. But the reality is more complicated...

A Christian Response to Overpopulation

A Christian Response to Overpopulation