Penny dressed up for "green" day at school

Halloween. Never a holiday that brings out the best in me. Last year's Halloween post included my admission that I generally lean (heavily) upon my mother for costumes and decorations, including many a year where even the trick or treating occurred in her neighborhood. I remembered the conversation from last October:

"So I'm thinking about Halloween," I said.

"Yeah," Peter said. "We could go to the consignment store and find something cute."

Peter looked at me with his eyebrows slightly raised. "You are also somewhat opposed to anything crafty." 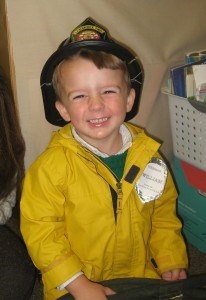 But this year, I thought I had my act together. I conceded to the commercialism of the season and headed to Target. I couldn't bring myself to buy William a Buzz Lightyear costume (he hasn't seen Toy Story, and everything else would have been too big or it involved blood, as in, vampire), so I improvised. I bought a doctor costume for Penny as she loves playing doctor, and decided we could make William into a fireman. They would both be helpers. They both thought this was a great idea.

I left for Richmond a few days before Halloween, with instructions for how the costumes would go (they were celebrating it in our neighborhood on Sunday night, so they needed the costumes before I returned). Make a badge for William and give him a hose. Make sure Penny wears leggings and a shirt underneath the thin scrubs of her doctor outfit. Take pictures. Please. 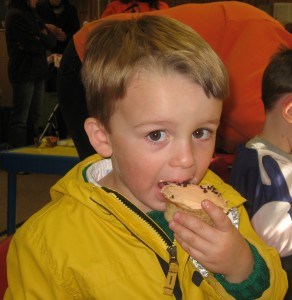 I came back from Richmond at midnight on October 30th primarily in order to be home for Halloween day, because Penny and William both had events at school. So–off to William's party, with its rendition of Five Little Pumpkins and trick or treating in the big school and bat dance and pumpkin cupcakes. And then off to Penny's school that afternoon. I watched and cheered as the high school marching band played for us all. I waved at Penny as she paraded around. And then they paraded inside, and William and I walked down the hill. We came back to pick up Penny an hour later.

When we picked her up, I noticed that hardly any other kids were there. I was about two minutes later than usual, but what was going on? I didn't think much of it until my friend asked, "How was the party in Penny's classroom?"

"Penny, did other mommies and daddies come to your classroom after the parade?" 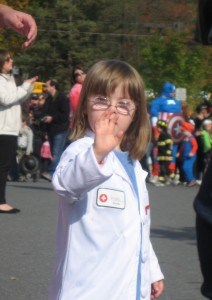 For absolutely no good reason. I don't even know why I wasn't there. Because I was out of town and missed a flyer that came home from school? Because I left the parade too early to realize that all the other parents were streaming inside too? Because I got home at midnight and I'm tired and not paying attention? But not because I don't think your Halloween party is more important than everything else on my list today. Not because I didn't want to be there.

On the one hand, people make mistakes. I have a hard time knowing how to handle my mistakes, so maybe this is one more opportunity to admit my humanity and learn to let go. On the other hand, I'm typing this with tears streaming down my cheeks (which doesn't happen often), so maybe I need to pay attention. Maybe I need to scale back and stop working so hard. I just don't know.

Penny doesn't hold grudges. She says she forgives me, and I believe it. But I sure wish I could rewind today's tape and show up at that door. I sure wish she hadn't been alone for the party. And I sure hope she knows how much I love her.

Halloween; Motherhood
November 01, 2011 at 7:17 am
To add a comment you need to be a registered user or Christianity Today subscriber.

I Missed the Halloween Party ?!?

1 of 4
Penny dressed up for "green" day at schoolDr. Penny on parade
Follow Amy Julia

I Missed the Halloween Party ?!?