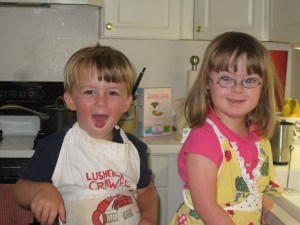 William and I were watching Bambi together last week. Penny was already asleep. Near the end, when spring comes, all the little animals fall in love. Owl calls them "twitterpated." William was very confused.

He got a pensive look on his face and then nodded slowly. "Oh. Like Penny and I are super-great friends."

I didn't explain the nuances between super-great friendship and marriage. I just gave him a little squeeze and said, "Yes, kind of like that." 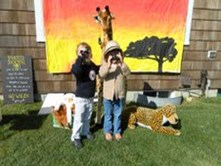 Penny dressed up for "green" day at school

I keep prayer cards for our children, which I pull out less frequently than I would like. But one of the things I have written on both Penny's and William's card is "friendship with siblings." Much of this year their relationship has consisted of a predictable pattern: Penny orders William to do something, a la every other bossy big sister I know (myself included). Eventually, William hits or pushes or pokes, usually without malice. He's just filling the shoes of "annoying little brother." Penny then collapses in sobs of grief. Now, this pattern still happens on an almost daily basis. But what also happens on an almost daily basis is something resembling friendship–when Penny says, "Let's play Cinderella. You can be Gus and I will be Cinderella." Or when they decide to "cook dinner" or "go to the doctor" or "build a spaceship." They enter a little imaginative world together, and I happily fade into the background.

People ask me sometimes how it is for William to have an older sister with Down syndrome. He knows the words "Down syndrome" and he knows Penny "has" that. But at the same time, he only sees her as his big sister, and his friend. Other siblings of children with disabilities have told me that for them, there was no "before" and "after." Their sibling was just always their sibling. "Disability" was always a part of their life, so natural it hardly needed naming or explanation.

The past two days have been rough for William. When I pick him up from preschool, he looks around with a frown. "Why Penny still in kindergarten? Why she not at home with me?"

He misses his friend. And for that, I am grateful.

Disability; Friendship
September 08, 2011 at 8:27 am
To add a comment you need to be a registered user or Christianity Today subscriber.