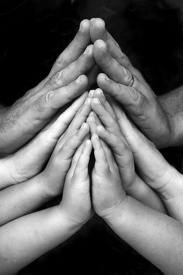 A lot of my friends describe themselves as "spiritual but not religious." I think I know what they mean. I think they don't want some of the restrictions that come with religiosity–the rules that mandate saying certain prayers or feeling lots of guilt. They don't want to find themselves in the category of "closed-minded" or exclusive. And they probably don't want the particularity of religion or the authority of say, a priest or the Church with a capital C.

With that said, I think they do want the general belief in God, a general sense that goodness orders the universe, that love and peace and joy are all good things, that human rights actually matter, and that we can experience some sort of mystical communion with God/the universe/whatever through spirituality. They want to get rid of the trappings of religion but hold on to the belief in a benign deity with some degree of loving power over human affairs.

I resonate with many of these desires. I don't want my relationship with God to be dictated by rules or regulations. I don't want my children to grow up with a sense of obligation to read the Bible or go to church or say prayers. Rather, I want to experience God (and I want our kids to experience God) out of love and joy and friendship. I want to believe that God is at work in our world, in my life and in the lives of everyone else. I want to believe it will all work out in the end.

But I wouldn't go so far as to say that I'm spiritual but not religious.

First of all, I believe that God is God (and I believe that God is God in the form of what Christians call the Trinity–Father, Son, and Holy Spirit). I believe in an ontological divide, a separation between the being of God and my being. I believe that my life will be most purposeful, good, and meaningful when I live it under God's authority. God's loving, gracious, good authority, but God's authority nevertheless. And I believe that God has given us "religion" as a way to recognize that authority and as a way to experience spirituality. Church, reading the Bible, prayer–these religious forms are means to the end of encountering the Spirit as other, as the one who corrects us for our sin, forgives us, restores us, and sends us out into the world as messengers of peace and good news.

Second of all, because I believe that God is God, I also believe that I am not God (much as I am tempted to think otherwise much of the time). Spirituality without religion gives far too much significance to my opinions, my desires, my choices. I become the center of the universe, the arbiter of my own moral world. It becomes all about me and what I feel like doing when I feel like doing it.

When I look to Jesus, I see a man who was religious–he went to temple and he memorized Scripture and he obeyed the moral law. But I also see a man who was spiritual–he prayed by himself, he called God "Daddy," he demonstrated great compassion for people, he welcomed the outcast. His religion gave him boundaries for his spirituality. His spirituality gave him freedom within his religion.

At the end of the day, I place my hope in the particularity of a God who bridged the ontological divide through a human baby, through a man who grew up in Palestine two thousand years ago. And from him I take my lead. I'm both spiritual and religious.

Jesus; Philosophy; Prayer and Spirituality; Trinity
September 13, 2011 at 7:42 am
To add a comment you need to be a registered user or Christianity Today subscriber.

Why I'm Both Spiritual and Religious

Why I'm Both Spiritual and Religious