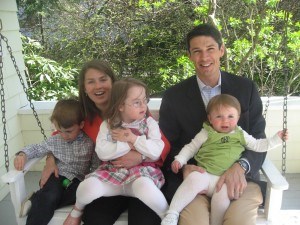 Our best attempt at a family photo at Easter

Last week, I had the privilege of sharing some thoughts on the Beatitudes, Matthew 5:3-11, during chapel at Western Theological Seminary. Here is an edited version of what I said:

As a Christian, it's easy to criticize our cultural vision of the blessed life. We know that beauty is more than skin deep and that our treasure is supposed to be in heaven and that wisdom, which begins with the fear of the Lord, is more significant than college degrees. And yet I easily end up in some Christianized version of this blessed American life. I find myself thinking, if only I could hire someone to run errands, I wouldn't feel so busy. If only I had enough time to work out a few extra hours a week, then I could be satisfied with my body. If only our children would sleep until 7:00 in the morning, then I could start my day with prayer and Scripture. If only life were under my control, if only I weren't so limited by time and money, then I would be blessed.

In the Beatitudes, Jesus singles out the people we would least expect to see as blessed: the poor, the meek, even those who "hunger and thirst after righteousness…" That sounds awfully pious, but it also implies that they don't have the righteousness after which they seek. They are the spiritually earnest but destitute. The spiritually needy ones. Or, as Jesus puts it earlier, the poor in spirit. The ones who know themselves as dependent upon God. The ones who aren't able to be self-sufficient. The ones who don't have it all together, who don't have their lives under control.

I suspect that most of you have heard the Beatitudes before, and as a result, I suspect that many of you are like me. I have often thought of the Beatitudes as the Scriptural equivalent of looking at a Thomas Kincade painting with elevator music in the background. Soothing. Gentle on the eyes. Fading into the woodwork. And not having all that much practical application in my daily life. But when I think about the ways I try to find blessedness—through control, independence, and denial of my human limitations—I realize that these words of Jesus are neither innocuous nor soothing. They are an affront to my way of living.

Think with me for a minute about your vision of blessed humanity. Perhaps the easiest way to do this is to think of what you imagine it was like for Adam and Eve in the garden, or what you imagine you will be like on the day of resurrection, in the new heavens and the new earth. Will you be able to run a marathon? Will you have perfect SAT scores? Will you be tall and strong and beautiful? 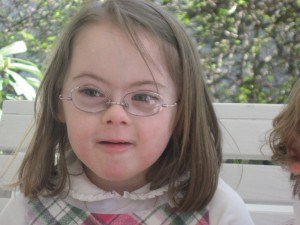 Six years ago I was given a daughter with Down syndrome, and I began to see the impoverishment that I had been experiencing by denying my need for other people, denying my own limitations, denying my own humanity. In some ways, understanding, or at least catching a glimpse of this blessed life was forced upon me.

But as I look back to the Beatitudes, I'm struck by the fact that we can choose the blessed life. The Beatitudes at their core are a description of people who recognize that they are needy, dependent, and vulnerable, like little children, like many people with disabilities, and, if we have eyes to see, like all of us.

I'm going to relate a story that appears in A Good and Perfect Gift to try to offer a picture of blessed humanity. This moment happened when Penny was one year old and I had gone away from her for the first time for a retreat at a monastery:

One of the brothers stood up to pray and read Scripture before our meal. He walked to the podium with an awkward gait, as if his hips and legs were hewn of the same piece. His head tilted slightly to the side. He opened the Bible and began to page through. Back and forth, back and forth.

People around me began to shift their weight. Impatience rose like steam from a boiling pot of water, wispy at first, and then picking up in speed and intensity. I held my breath, willing him to speak.

He looked up. Another brother walked to his side, and the reader said, "I can't find the passage." His words were somewhat garbled, as if he had rocks in his mouth.

The younger brother located the passage and stepped back, and the first man proclaimed, "In the beginning, God created the heavens and the earth." He finished reading Genesis 1, offered a blessing for our meal, and turned to get in line for food.

As we moved to pick up trays and utensils for dinner, greeting other friends and maintaining steady conversation about our lives, I kept thinking about the brother behind the podium. Had I watched the same scene unfold a year earlier, I would have been annoyed by the delay, maybe even embarrassed by his predicament. I could imagine the questions that would have been running through my head—Why can't they find someone who can read, who at least knows where the first book in the Bible is located? But today, I could have listened to him for an hour. Without knowing it, he had welcomed me, with his imperfect speech and the fact that he needed help finding Genesis. He allowed me to envision Penny one day reading the Bible in public. He allowed me to believe Penny could be treated as a fellow child of God without distinction, without dividing lines.

In seminary, it's easy to think that getting your papers in on time and memorizing Hebrew vocab words and learning how to preach good sermons will set you up to serve the church. On some level, they will. But only if those things come in the context of the people who make up the Body of Christ. It's easy to forget the importance of those who will never be able to tell you about Greek participles or modalism or use big words like eschatological and pericope. But Jesus tells us that remembering the poor, the spiritually depleted, the little children, the ones he calls "the least of these," is of the utmost importance. Not only because we are called to serve those people, but because we are called to recognize ourselves in and among them, because in and as we recognize our common humanity, our common limitation, dependence, vulnerability, and need, we receive his blessing, we become the blessed ones, the ones who inherit the kingdom of God.

Beatitudes; Down Syndrome
April 23, 2012 at 5:59 am
To add a comment you need to be a registered user or Christianity Today subscriber.