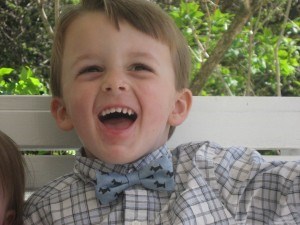 Penny and William and I were reading Thomas the Train a while back, and Thomas faced a conundrum. He desperately wanted to get back to the station so he could be the train to take a group of children home from a school trip. But as he chugged along he noticed a bus that had broken down. Should he hurry on to the station? Or should he stop and help the bus passengers?

I paused before we turned the page and posed the question to my kids. Penny said, "Help!" When I asked her why, she explained, "Because those people need a ride." William said, "Hurry, because he is supposed to get back to the train station as soon as possible."

My first reaction was to think, Yep, William is certainly a typical kid, rushing past people to pursue a goal. And Penny is so sweet. So loving. So attentive to people in need. Yes, William reminds me of myself while Penny reminds me of the Good Samaritan (a story that got her very animated even as a two-year old when she could NOT understand why there were people who didn't stop to help). And yes, William's instincts are ones that will allow him to accomplish a lot and perhaps overlook other people in the process. Penny is not quite so goal-oriented, and as such she's a great corrective to the people around her. 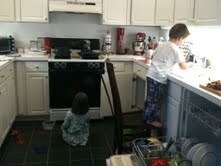 But. The truth of the matter is that Penny's strength has a corresponding weakness, and William's "weakness" has a corresponding strength. Just last night, after dinner, William promptly pulled a chair over to the sink and started washing dishes. Penny sat down in front of the oven to sing to her reflection. The same part of William that says "Hurry" also wants to help with housework. The same part of Penny that says "help" wants nothing to do with picking up toys or putting dishes away.

As it happens in the story, Thomas stops. It turns out that the bus is filled with the very children he was rushing to pick up at the station. It's a win win. By helping, he accomplishes the goal of his hurrying. Maybe Penny and William will help each other's lives be a win-win. Maybe he'll teach her a little about hurrying, and she'll teach him a little about helping. And they'll both teach me a little bit about both.

Parenting
April 27, 2012 at 10:00 am
To add a comment you need to be a registered user or Christianity Today subscriber.