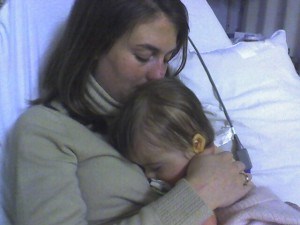 Penny in the hospital as a baby

Penny will have surgery on her eyes and ears next week, on February 17th. She's had a few minor surgeries before–tubes in her ears twice, a heart procedure when she was 14 months old, stints placed in her tear ducts to help them open up. But this will be the first time that she's aware of what's happening ahead of time. "I don't want surgery, Mom," she tells me, often. It's also the first time I've been told to expect a difficult recovery. In the past, as soon as she overcame the effects of the anesthesia, she was all set. This time, the doctors need to correct her left eye, which is crossing, and to do so they will cut a muscle in both eyes. She'll be sore at best (and in a fair amount of pain at worse). And she'll be home for 5-7 days.

In addition to the eye surgery, she's having tubes put into both ears. This is round three of tubes for her, and it was brought on by the recent discovery that she can't hear. A few weeks back, I was despondent about the tough time Penny was having at school and at home. She just wasn't listening to anything I said. That night, I called to her from a few feet away when she happened to be looking at Peter. She didn't turn her head. I tried again. No response. I then shouted her name and she immediately looked at me. My eyes met Peter, and my heart started racing. She wasn't listening because she couldn't hear me.

We drove to Philadelphia a few days later to see the ENT. Fluid in both ears. The audiologist confirmed that Penny has a moderate (which is to say, pretty significant–she can hardly hear conversational speech) hearing loss in both ears. I think she's become quite adept at lip-reading. Tubes should help, because they will drain the fluid, but we still might be looking at hearing aids after that. The funny part of it is my response. Years ago, I think I would have been really sad about it all, and particularly sad at the stigma of Penny being "different" or the thought that she'd look funny or the inconvenience of dealing with hearing aids. Now I'm pretty overwhelmed with gratitude.

I'm not looking forward to next Friday. I hate the thought of Penny's pain and fear. But I now count it as a blessing, and not a burden, that we live in a time when a little girl can be helped with relatively minimal effort and be able to hear and learn and do all the stuff that other little girls do. She'll be back in school a week later, making friends, learning to read, and loving her life. Yes. I'm grateful.

Surgery
February 09, 2012 at 9:43 am
To add a comment you need to be a registered user or Christianity Today subscriber.

Penny's Upcoming Surgery, or, Believe it or not, I'm Grateful

Penny in the hospital as a baby
Follow Amy Julia

Penny's Upcoming Surgery, or, Believe it or not, I'm Grateful