Home > 2012 > February
Photo Shoot with TIME, or What Does Down syndrome Look Like?Amy Julia Becker
expand 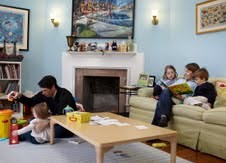 Reed and Aaron showed up at 11:00 last Sunday, just as we were getting home from church. They left around 5:00. Six hours of zooming in on our family life–eating Sunday brunch, reading on the couch, heading outside for a walk. We had no idea if a photo of our family would be included in the magazine, and we certainly didn't expect to take up most of two pages (if you are not a subscriber to TIME, go to a newsstand near you and check out pages 36-37). The caption: "The new face of the Down-syndrome family."

Before they arrived, I told our kids they were coming. Penny gave me a small smile and said, "Can Reed read?" And then she giggled. She was shy when they arrived, but he quickly won her over. In the middle of the afternoon (with Marilee napping and William lying on the couch–turns out he had a fever of 103 but 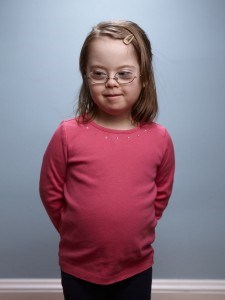 still rallied to walk in the snow), she had an hour-long portrait session. And by the end of the day, I kid you not, he had given her his who-knows-how-expensive camera and she was taking pictures of him.

I'm planning to post this afternoon about why I think this article, Early Decision, by Bonnie Rochman, is the best article I've ever read about prenatal testing and Down syndrome. For now, I'll just say I'm honored that we were included within it, and I'm honored to think that we might represent something real and true about families who have children with Down syndrome in their midst. Rochman's conclusion sums up our hope:

So McLaughlin (another mother of a child with DS who talks to people with a prenatal diagnosis of DS) tells the people who come to see her the truth-the good and the bad, the joyous and the challenging.

Any parent raising any child will have the same range of experiences, albeit in different ways. It's that very possibility of ordinariness, though, that may best capture the new world of the Down syndrome child. 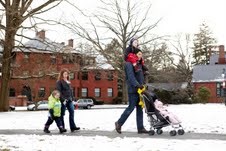 We've been set apart by virtue of Penny's third 21st chromosome, but we certainly feel pretty ordinary. A family that reads books and plays games and is never entirely cleaned up (see photo above, and note that this is about the cleanest our playroom ever gets) and never entirely up to date (note the nativity scene still on the mantel–William's request). A family that includes temper tantrums and sick kids and playdates and sibling bickering. A family that includes love and laughter and frustration and anger and everything in between. We have a daughter with Down syndrome. And we're a lot like everybody else.

P.S. I'm saving my very favorite photos–a few more portraits of Penny–for a future post, but I do need to encourage you all to take a trip to Reed Young's website. From Italy to India to New Orleans to Brownsville, they do more than capture an image. I was going to write that they tell stories. But then I remembered an artist who once said that if she could put her paintings into words, she wouldn't have needed to paint them. I think something similar is true of Reed's photographs. They tell a story, I suppose, but they do so much more.

Publications
February 21, 2012 at 7:44 am
To add a comment you need to be a registered user or Christianity Today subscriber.

Photo Shoot with TIME, or What Does Down syndrome Look Like?

Photo Shoot with TIME, or What Does Down syndrome Look Like?