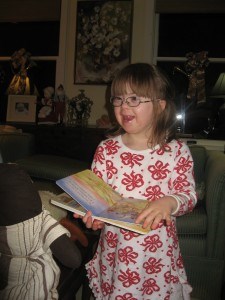 Penny reading the Christmas story at our Birthday Party for Jesus

Some people still think that it is sad that Penny has Down syndrome, and that as her parents we have simply "come to terms" with her diagnosis. I'd say instead that while Down syndrome brings with it plenty of challenges, the fact that our daughter was born with it has also opened our eyes, and our hearts, to a new reality. It's the reality that disability is a human experience, much like any other–complicated, often difficult, often rewarding, and with the possibility for great joy. My life is far richer as a result of having a child with Down syndrome. I hope some day Penny might say the same about herself.

Rick Morley, an Episcopal priest and blogger, recently wrote about starting a ministry for families of children with disabilities within his church:

It's a story as old as ministry itself.

You begin a ministry to someone, to a group of people, to a certain place and population—fully expecting that YOU are going to serve THEM.

Bless their little pea-pickin' hearts. Won't they be lucky.

It's an easy attitude to have with any group of "unfortunate people," people who "need" us. But, as Morely writes :

Right now we're calling it, "Exceptional Worship." It's an "anything goes" kind of worship where parents don't have to feel like they need to contain that which can't be contained. No need to shush anyone, or tell anyone to sit down.

All God's Children get to come and worship just as they are. Just as God made us. Each and every one.

As referenced above, this was one of those projects conceived to "minister to THEM," which quickly became a conduit whereby I've been blessed beyond compare.

(Incidentally, Rick Morely wrote those reflections in conjunction with a lovely review of A Good and Perfect Gift. To visit his blog or read more of the review, click here.)

In four years of operation, we have learned that our residents with disabilities can grow further and faster than even family members imagined. When we selected the friend residents, we used a psychological/development instrument to help assess their readiness for independent living in several areas. But today, that instrument is no longer applicable. Our friends have literally outgrown it. As one parent exclaimed, "My child has just blossomed."

But the blessing has not been limited to the individuals with disabilities:

We at Western Seminary would be diminished without the presence of our Friendship House friends. In only a few years, they have made contributions to our seminary community that we never could have imagined. We discern the body of Christ more deeply when we participate in the Lord's Supper together. Worship is enriched by the offering of liturgical dance. Michigan football wins are celebrated, losses grieved. Laughter abounds.

I can barely remember Western Seminary before Friendship House. I cannot imagine the school now without it.

Friendship; Spiritual Formation
January 09, 2012 at 9:49 am
To add a comment you need to be a registered user or Christianity Today subscriber.

Blessings Upon Blessings: Exceptional Worship and ...