Home > 2012 > January
You're Pregnant. Should You Screen for Down Syndrome?Amy Julia Becker
expand 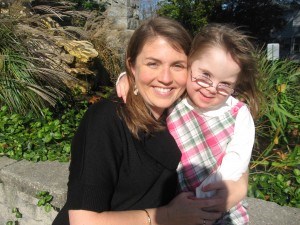 I've written before about my own experience with prenatal testing ("Sometimes It's Good Not to Have a Choice" and "Why Prenatal Testing Harms as Much as it Helps" for Motherlode, the New York Times' Parenting blog).

Here's what I wrote to my friends:

Ultrasounds will often (but not always) be able to identify markers of anatomical or health problems. I felt it was important to have the standard ultrasounds along the way in all of my pregnancies. If there was a heart defect or physical indication that the baby had a Trisomy of some sort, I wanted to have proper medical care available as soon as s/he was born. If the ultrasound (in conjunction, of course, with the standard measurements and appointments with my ob-gyn/midwife) didn't show any potential problems, I felt satisfied that simply giving birth in a hospital would provide the necessary care for me and our child. With Penny, I feel confident that the reason we didn't know she had Down syndrome is because she was a healthy baby. A little small, but no significant heart, lung, or intestinal problems. Nothing that we needed to know ahead of time.

The second way at present to obtain information is through prenatal screening. These tests offer a non-invasive way to determine your "risk" (or, as I like to put it, your "chance") of having a baby with Trisomy 21 (or some of the other Trisomies). Even for women who wouldn't consider abortion, these tests can be a helpful way to feel at ease–if your chance comes back at 1 in 10,000, you can feel relatively certain that your child does not have a Trisomy. But whenever the tests come back with a number like "1 in 300" or even "1 in 50," you're left wondering what to do next (1 in 50 still means there are 49 women with the same result who won't have a child with the Trisomy). If you don't want an amnio or CVS due to the risk of miscarriage, then you go through the rest of the pregnancy with a question/fear about your child. And if the test comes back with relative certainty about a Trisomy, I'm still not convinced that the information is helpful.

Knowing that Penny had an extra chromosome would have told me very little about her. It couldn't even tell me the most basic characteristics–her hair or eye color or gender– much less the distinctive markers that make her her–the things I've written about again and again, her determination, her love for books, her inability to sing on key, her pitcher's arm, her ability to make her little sister giggle. In retrospect, I don't know how the diagnosis "Trisomy 21" could have helped us in utero.

Some friends of mine who received prenatal diagnoses differ with me here. (Others agree–they say it was awful to know a diagnosis without knowing a child.) The ones who disagree with me say that they had time to emotionally prepare and as a result they were able to welcome their child with celebration and open arms. 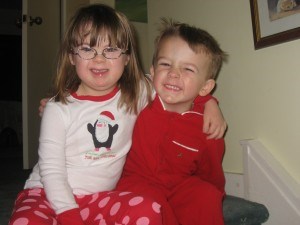 What I've realized over time is that prenatal screening/testing has a lot to do with control, and with the illusion that we have control over our children's lives. On some level this is true in utero. We control some of the nutrients they receive. We have a choice in this country about whether or not we will terminate their lives before they are born. But as Christians, we are stewards of the gifts of life God has given us. As Christians we can argue about whether it is ever an ethical decision to terminate a pregnancy, but we can also affirm the inherent value of every human life, whether or not that life comes along with a disability. Moreover, as Christians, we recognize that we can't control life, but we can turn to God for strength and comfort when we face a frightening diagnosis. For me, a part of opening my hand to God's role in our family was to forgo prenatal tests and to recognize this lack of control from the very beginning. 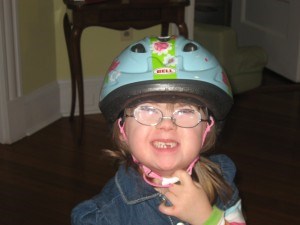 I wrote once that the only reason I wished I had done prenatal testing with Penny was so that I could now say that I chose her. I hate it when people imply that had I known ahead of time I would have ended her life. But I've realized over time that I did choose her. In choosing not to have an amnio (with her, we did have a prenatal screening test that said she had a 1 in 300 chance of having DS, enough to raise a yellow flag), I chose to receive her, whomever she might be. With William, I did some prenatal screening, but I wished I hadn't because I felt that I had participated in an industry designed in many ways to eliminate people with Down syndrome from our society. So with Marilee, I opted out of all prenatal screening. In doing so, with the knowledge that my chance at age 33 of having another baby with Down syndrome was akin to that of a woman in her early 40's, again I chose to receive my child, whomever s/he might be.

If I had it to do over, with each pregnancy, I would forgo the prenatal screening tests but do the ultrasounds. But I would also spend more time trying to prepare my heart to truly receive whatever person God gave us.

Down Syndrome; Pregnancy
January 11, 2012 at 9:10 am
To add a comment you need to be a registered user or Christianity Today subscriber.

You're Pregnant. Should You Screen for Down Syndrome?

You're Pregnant. Should You Screen for Down Syndrome?