Home > 2012 > June
Why I Let My Kids Play with PoisonI don’t want to subject my kids to needless danger but I do want to teach them and myself, that I can’t control every aspect of their lives.Amy Julia Becker
expand 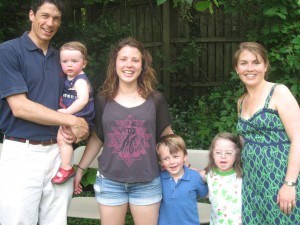 We went to a graduation party a few weeks back. It was a lovely afternoon, with family and friends gathered to celebrate the graduate at her home. We brought all three kids with us, and we faced a decision. There was an open space with food and drink and tables, and then an enclosed backyard. After I chased Marilee, who was striding toward the street, a few times, I decided to put her behind the fence with Penny and William.

Marilee is 16 months going on 4 years old. She desperately wants to be able to do everything her big brother and sister can do. She resists her high chair. She loves brushing her teeth. She hates it when I carry her up the stairs to save time and insatead wants to do it herself, not on hands and knees, but step by laborious step.

Penny and William had discovered two treasures of the backyard, and Marilee quickly joined in their fun. First, a Bilco door. There was a chance of injury for all of them as they ran up and down the uneven metal surface,but since Marilee still sometimes walks like a drunken sailor, hers was the most precarious position. 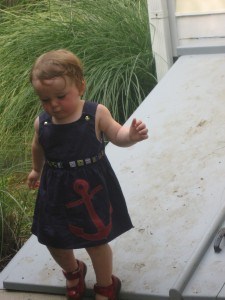 Then there were the berries, littered upon the ground which all three kids decided should adorn the bird fountain. 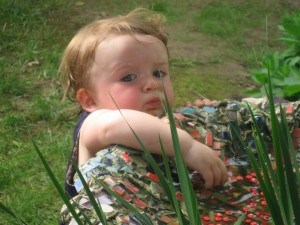 And yes, I knew the berries were poisonous.

It became a simple series of equations:

1) likelihood that she will fall off the Bilco door? Significant, but even if she does, she's probably not going to sustain significant injury.

2) That she'll eat the berries? Unlikely. Early on, I watched her put one in her mouth and spit it out.

3) That, if I remove her from the backyard and allow her to roam she will run into the street? High enough that I wasnt willing to take the risk.

And so, poisonous berries and Bilco door it was.

At the end of the day, of course I'm supposed to keep my kids safe. And perhaps I was being negligent or self indulgent or just lazy in my approach to the afternoon. But safety involves taking calculated risks, giving freedom within boundaries and recognizing that uncertainty and danger is a part of nearly every situation. I don't want to subject my kids to needless danger but I do want to teach them, and myself, that I can't control every aspect of their lives. Marilee made it through the day–muddy, sweaty, happy–and unscathed: 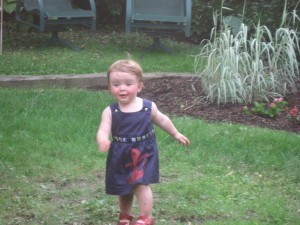 Children
June 27, 2012 at 6:50 am
To add a comment you need to be a registered user or Christianity Today subscriber.

Why I Let My Kids Play with Poison

Why I Let My Kids Play with Poison