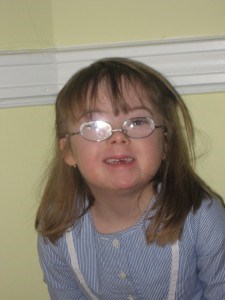 Penny had surgery a few weeks back. It all went well. But in the recovery room, as Penny slept, with her hair matted to her head, an IV dripping fluid into her arm, her nurse started telling us about how the doctors often give different instructions to parents than they do to the nurses. "So then I look retarded," she continued. Peter and I caught each other's eye as the nurse looked away. Was she aware of what she had said? Was she embarrassed? Did she wish she had caught herself? I'll never know. Her shift ended a few minutes later.

Today is the annual "day of activation" for the "Spread the word to end the word" campaign. In honor of this day, I'm going to repost in full (with a few tweaks) something I wrote two years ago, and I'll include links at the bottom to other posts related to this topic:

When Penny was three-weeks old, I was on the phone, telling the story of her birth to a friend. I had gone over all those details so many times by that point, it was a relief to ask her the question, "How are you?"

She talked about their kids, and then moved on to the frustration of having a husband who couldn't remember to recycle. "I mean," she said, "what is he, retarded?"

She kept talking, but I didn't hear anything else. All I could think was, No. Your husband with a college degree and a Masters in History is not retarded. But my daughter is.

It happens all the time. I'm at dinner and someone drops a fork: "I'm so retarded!" Or, on a bus with a group of kids who are jostling, laughing, teasing each other: "You're such a retard!" Or, listening to a speaker—a CEO of a Fortune 500 Company—address a roomful of high school students: "You have to remember that when I was a freshman in college I was retarded," he said, in reference to his attitude toward members of the opposite sex.

The doctors who gave us the news that Penny had Down syndrome offered two guarantees: low muscle tone and mental retardation. Mental retardation. It's a medical diagnosis intended to help evaluate a person's ability to navigate the world. Ideally, labeling someone "mentally retarded" guarantees support—therapeutic, medical, social, educational, vocational support—from the community. And yet, rather than remaining within the clinical context, these words have become a casual term of self-deprecation and derision.

Spread the Word to End the Word has designated today as a day to promote awareness about the hurtful use of "the r-word." At www.r-word.org, nearly 250,000 people have pledged to "support the elimination of the derogatory use of the r-word from everyday speech and promote the acceptance and inclusion of people with intellectual disabilities."

The Special Olympics has been criticized for trying to ban a word (see "The Case Against Banning the Word Retarded"), and plenty of people shrug their shoulders at what seems to be one more sign of rampant political correctness. And yet, language at its best conveys something true about reality. Early on in Penny's life, we made the switch from calling her a "Down's baby" to a "baby with Down syndrome." Her existence as our child came first. Her diagnosis came second.

And when it comes to the word retarded, the same point holds. I could argue that my friend didn't mean anything when she used that word to describe her husband. It was just a way to express frustration. She certainly didn't mean to hurt us. But about a year after Penny was born, that same friend and I were having dinner. She'd gotten to know our daughter. She had heard about the joys and struggles and complications that can come with a diagnosis of mental retardation. At dinner, her eyes filled at one point and she reached across the table. "I've used the word retarded all my life, and I'm really trying to get it out of my vocabulary. I'm sorry for anytime I've said it to you."

The Spread the Word to End the Word campaign is not about banning a word. It's about caring for people. People who laugh and play and cry and struggle. People like our daughter. People like Penny.

If you want to help spread the word to end the word, click here for resources in that effort.

If you'd like to read more on this topic:

Movies and the R-Word

They Cheered for Me

If I Accidentally Say the Word Retarded

The Limitations of Language

Finding the Right Words for Disability (on the her.meneutics blog)

Disability; Evangelism
March 07, 2012 at 6:25 am
To add a comment you need to be a registered user or Christianity Today subscriber.

The R-Word and the Courage to Say I'm Sorry

The R-Word and the Courage to Say I'm Sorry