Home > 2012 > May
How Can You Talk with your Kids About Disability?Amy Julia Becker
expand 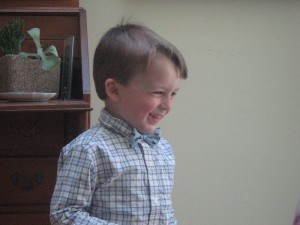 William came home from school a few weeks back and he said, "Mom." He said it as a sentence, the way he does when he has something important to tell me. And then again, "Mom. My friend Ashley is not good at listening. And she screams."

William is three. He attends a local public preschool, and he's in an "integrated" classroom, which is to say, a classroom where typically developing children learn and play alongside children with special needs. Three years ago, William's older sister Penny was in the same classroom, but she entered it with an "I.E.P.," an Individualized Education Plan. Penny has Trisomy 21, also known as Down syndrome, and that third chromosome impacts nearly every aspect of her development. She wears braces to support her flat feet and weak ankles. When she was in preschool, she relied on sign language in addition to spoken words to communicate. She received Occupational Therapy, Speech Therapy, and Physical Therapy as a part of her classroom experience.

But just because I have a daughter with a disability doesn't mean that I know how to talk about disabilities with my children. When Penny was first born, I found myself in a maze of words that had never mattered to me before – abnormality, disability, high-risk pregnancy, genetic counseling, special needs. It became easier with time. I started to use "people-first" language, calling her a baby with Down syndrome instead of a Down's baby. I substituted "normal" with "typical " when it came to describing other children. In my subsequent pregnancies, I talked about the "chance" of having another child with Down syndrome instead of the "risk." 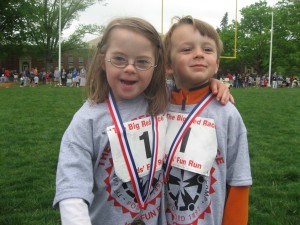 And over time, the words became more than politically correct attempts to support my new identity as the mother of a child with a disability. Over time, the words became reality. I really did see Penny as a child first, with Down syndrome as a descriptive but secondary marker. I really did come to believe that individuals with disabilities were not people to be pitied or people in need of help but rather human beings who were just like me. Our particularities were different, but I came to understand that we all have limitations and places of vulnerability and need, and we all have possibilities for joy and relationships and self-giving.

I said, "Maybe she hasn't learned how to listen yet."

And then I asked, "What is Ashley good at?"

He tilted his head. "Playin' games and runnin' around." 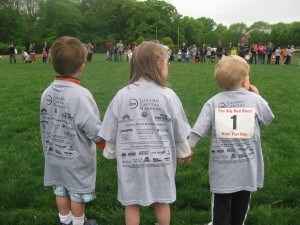 William, Penny, and a friend from school

That was the end of our conversation. William has talked about Ashley since then, but only because he tells me things about his friend – that she takes the bus, that they pretend to do cooking together, that he wanted to have a sticker chart with prizes just like her. As far as William is concerned, Ashley is just another kid in his class. There are some things that are hard for her. There are some things she's good at. Just like him.

Eventually William will realize that many aspects of our culture – from language to legislation – erect walls between kids like him and kids like Ashley. But I hope that growing up with a sister with Down syndrome and going to school alongside boys and girls who have different challenges than he does will open his eyes, and his heart, to understanding our common humanity. I hope he will grow up with an ability to see beyond labels, to trust that he has something to offer to everyone he meets, but that he also has something to receive from them. I hope, for the sake of both children's well-being, that he and Ashley will stay friends.

Disability
May 30, 2012 at 10:45 am
To add a comment you need to be a registered user or Christianity Today subscriber.

How Can You Talk with your Kids About Disability?

1 of 3
William, Penny, and a friend from school
Follow Amy Julia

How Can You Talk with your Kids About Disability?