Home > 2012 > November
Halloween and HurricanesIn the past, I have said that Halloween is wasteful. I would still say that it is frivolous. But this year has made me grateful for frivolity, for the safety and comfort that allows families and communities to gather together and dress up and take pictures and giggle and eat candy.Amy Julia Becker
expand 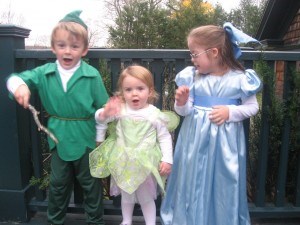 I grew up in a household where every holiday deserved attention. Valentine's Day involved red heart-shaped ornaments with photos of me and my three sisters inside. At Thanksgiving, my mother brought out the stuffed pilgrims she had made by hand and the drawings we had done in grade school to commemorate the meal. Green milk on St. Patrick's day and black-eyed peas on New Year's. I won't begin to describe the house at Christmas. Halloween, of course, demanded attention as well, in the form of spiders and cats and hats, dangly pumpkin earrings and costumes that always involved some measure of creativity. One year, we four girls dressed as the weather: a cloud, a rainbow, a sunshine, and a raindrop.

Now that I have my own children, it feels hard to measure up. A few years ago, I told my husband I was somewhat opposed to store bought costumes and he responded, "You are also somewhat opposed to anything crafty." That year, Mom came through with handmade bunny and carrot suits from 1982. It's true that I don't have a crafty bone in my body, but I have also resisted the idea of Halloween. I roll my eyes at the six billion dollar industry (with more of that money directed toward adult costumes than kids) that has sprung up in the early fall. I have never been someone who loves dressing up. I guess I have been a bit of a Halloween Scrooge.

This year I decided to admit my own limitations as a mother. So when William was given a Peter Pan costume for his birthday, we went with it. We found a handmade Wendy dress online for Penny and the Disney Store was happy to provide a Tinkerbell costume, complete with wings and bells on Marilee's toes. We didn't manage to carve a pumpkin this year, and Marilee brought her spiderman backpack (a hand-me-down from her big brother) to carry her treats because I had forgotten to purchase plastic pumpkins as their candy receptacles. But there we were, taking pictures with the rest of the kids in the neighborhood, reminding our children to use their manners, reassuring Marilee that the big red dog was really just Jon's dad. 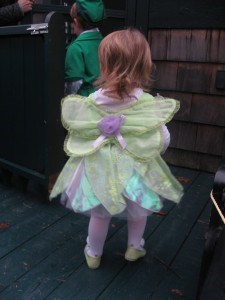 And it was really fun. William ran off with his new best friend. He even inserted himself in said friend's family photo. Penny and her dad got ahead of me, so Marilee and I tottered along, and every so often she stopped, jingled her toes and said, "Tinkabeh!" with a giggle. It was exactly what it was supposed to be. Simple, slightly excessive, fun.

When we got home, I called my mom. She and my dad and two of my sisters and their families live in and around Riverside, Connecticut. They were hard hit by the storm. My sisters are still camped out at my parents' house. They tell stories of friends whose cars were hit by falling trees, of the home down the street that burned to the ground, of flooded office space, of power outages that might last for over a week. And this year, my sister's kids didn't celebrate Halloween.

I know there are plenty of neighborhoods where even with the lights out, Halloween marched on. But there are also countless communities along the east coast where it was impossible to imagine revelry on Wednesday night. Costumes, laughter, safe passage around a neighborhood, couldn't happen.

In the past, I have said that Halloween is wasteful. I would still say that it is frivolous. But this year has made me grateful for frivolity, for the safety and comfort that allows families and communities to gather together and dress up and take pictures and giggle and eat candy. Parties and fun times can certainly cross a line into hedonistic excess. But setting aside time to celebrate, to have fun, can only happen when a community has order and peace and security. With at least 50 billion dollars in economic damage due to this storm, with hundreds of thousands of people displaced, with thousands of homes lost and at least one hundred lives stolen, I can only hope that soon there will be order and comfort and peace in the days to come.

I already look forward to Halloween next year, where thousands of parents up and down the east coast won't need to be worried about food and heat and shelter, and where thousands of kids will be dressed up, giggling, and running around their neighborhoods because it is just plain fun.

Halloween; Hurricanes
November 02, 2012 at 12:47 pm
To add a comment you need to be a registered user or Christianity Today subscriber.