Home > 2013 > April
Losing the Habit of FaithI learned on Easter Sunday that my inconsistent practice of faith changes nothing about God's faithfulness to us. Amy Julia Becker
expand 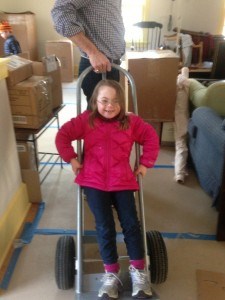 It has been six weeks since we moved into our new house. So far, we've lost a tie rack, a Fisher Price barn, a navy blue quilted jacket, and our silver. (I can now amend this post to say I discovered the silver at the bottom of a large overlooked box in the basement, interspersed among some stray legos and the aforementioned barn, which proceeded to let out a plaintive and persistent moo until I turned it off entirely. I also discovered a lamp, a trash can, a small wagon, and some Tupperware. You know you're a mother of small children when the silver and the legos get lost together.) I also lost Lent when we moved. It hadn't been a particularly observant Lenten season for me anyway, but when we moved any semblance of spiritual discipline disappeared. The prayer book I had been picking up morning and night remained misplaced for weeks (I unearthed it eventually, but Lent was over by that point). The sticker chart for the kids with the story of Easter is still missing.

On Easter Sunday I sat in church, struck by how distracted I had been for the better part of the Lenten season, how I had almost forgotten what it was we came to celebrate. Jesus' resurrection, yes, but also the promise, the hope, the anticipation of goodness and beauty and justice and truth, and God's good work breaking into our broken world. As I gazed at the white cloth draped over the cross and took in the sight of lilies in full bloom and sang "Christ the Lord is risen today, Alleluia!" (and comforted Marilee, who was crying in the nursery, and asked William to sit up in the pew to finish his coloring and whispered to Penny that she couldn't read the Bible out loud while the preacher was praying…), I was also struck by the fact that my faithlessness changed nothing.

It almost surprised me to realize that the tomb was empty regardless of my acknowledgment of that new and world-changing reality. It felt almost like an affront to my sense of significance to realize that I was still invited—as distracted and self-consumed as I had been—I was still invited to the celebration and into the hope and the promise and the goodness and the grace.

I lost the habit of faith this year. And yet I gained a greater faith in the grace, the infinite and unrelenting grace, of God.

Easter; Faithfulness; Pilgrimage and Travel
April 22, 2013 at 12:24 pm
To add a comment you need to be a registered user or Christianity Today subscriber.

Losing the Habit of Faith

Losing the Habit of Faith