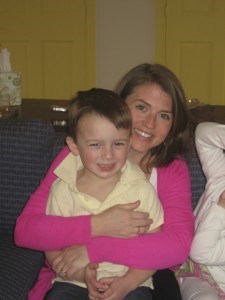 Peter had offered to let me sleep in. William didn't approve. As the morning wore on, he became more and more upset, and eventually his yelling woke me up. Soon enough, I was the recipient of his anger, as a result of denying him the towel that Marilee had requested. He never took a shower. He threw a lamp to the floor, overturned the dirty clothes basket, pushed Marilee, threw the towels I offered him down the stairs, and then yelled, loudly, for the next twelve minutes.

Before I write more of this story, I should be sure to note that:

a) William's behavior has been getting better and better as the year has gone on. What used to be a daily occurrence now comes in cycles, with a few days of fighting followed by weeks of peace.

b) I have learned a lot about creating the conditions for peace, and I'll give myself some credit for that, but...

c) I still struggle to know how to control my own emotions when he gets out of hand. Usually I end up escalating right along with him, until I make rash decisions like cutting the nub of his pacifier into pieces, as I did on Friday morning, or yelling back at him, as I did on Sunday afternoon when another similar incident occurred.

But I happened to have had enough sleep on Saturday night, William's intentions aside, so on Sunday morning I was a little better prepared than usual. I ignored him until he began to calm down, and then I joined him in his bed. I said, "William, I want to talk about what just happened with the shower. But first I want to tell you one thing."

He wouldn't look at me.

"Even if you hit me and yell at me and feel so so mad, I want you to know what always stays true."

He turned his head a little bit.

He met my eyes.

"And even if I feel really mad back at you, I love you."

"And even if you throw towels down the stairs and growl at me..." I paused.

We shared a big hug, and I just held him for a minute, resting my lips on his short sandy hair, breathing in his warmth and softness.

Then we talked about what he had done. He apologized to me and to Marilee, retrieved the towels that were strewn about, asked me to help him right the lamp, and got himself dressed for church. We walked into the sanctuary hand in hand, and he climbed onto my lap.

And all I could think about during the service was how much I am like my son. How much I resist God's grace and God's guidance. How often I insist on my own way and make a mess in the process. How often I choose another episode of Homeland instead of enough sleep to get up and pray the next morning. How often my to-do list gets in the way of being still. And how instinctive it is to think that God will respond by giving up on me, or by chastising me.

When what God really does, over and over again, is love me.

Children; God; Spiritual Disciplines
April 08, 2013 at 10:21 am
To add a comment you need to be a registered user or Christianity Today subscriber.

What William's Tantrums Have Taught Me About God's Love

What William's Tantrums Have Taught Me About God's Love