On Tuesday, I began a series of guest posts in which women reflect upon their prenatal testing experience. Patti Rice shared Why I Wish I Had Chosen Prenatal Testing, and today Meriah Nichols offers the opposite perspective:

The beginning of my pregnancy with Moxie feels jumbled, as I recollect it now, some 3 years later. It's a blur of happenings, events moving swiftly upon each other like quick waves that peak in a tsunami. The blur may be due to the events themselves or may be to the way my mind works – I have brain injury, sustained from jetting out of the windshield of a car when I was 4. Memories for me often shape themselves in unusual ways.

Like the day that we went to see our daughter for the first time.

I remember being in a black short dress with pirate sleeves that was from H&M, with black flared yoga pants. I liked that dress. I remember wanting to wear cherry red lipstick and not having any. I remember I wore my Earth moonboots and that Mikey didn't like them. I remember that we passed a moss green Nissan Cube on the way there. I remember the weather was crisp, dry and clear. I think I was about 10 weeks pregnant. I know I was 36 years old (I just did the math). I also know that I was pregnant after just having had a second trimester miscarriage.

We were on our way to the special clinic, the one where they send "higher risk" pregnancies to be examined. Once there, in the dim room with the brightness of the ultrasound machine in front of us, my belly exposed with glistening gel slathered on, we saw the blinking of our baby's heart, knew she was alive and for that, were happy. But we knew that the long pause and the lack of chatter from the technician signaled a problem. She left, and returned with the very same perinatologist who had told me that my last child had died. My heart sank as I saw him and I blurted out something along the lines of, "but the baby is alive! I know it! I can see the heart beating!"

He nodded. Yes, our baby was alive but there were problems. He showed us the line of her skin and the line of her body: they were clearly separated. She had a condition called diffuse fetal hydrops, in which her skin was completely separated from her body, with fluid lying between the two. She had heart holes. She was unlikely to make it to term. "0%" chance of survival, he gave her.  He suggested that we have an amniocentesis before she died to find out the cause of the hydrops – not necessarily for her as she was clearly beyond saving – but for future pregnancies.

Numb, and with aching hearts, we consented and returned a few weeks later for the test.

The amniocentesis revealed the presence of an extra chromosome. It also revealed that the baby was a girl. And miraculously – her diffuse fetal hydrops had completely resolved itself.

Despite being strongly encouraged to terminate her life on account of the Down syndrome, we chose to keep her. Perhaps I should be more honest here: my husband chose to keep her. My husband was adamant about keeping her, saying that we needed to "play with the cards we are given."

Continuing in this vein of honesty, I am not sure I would have kept her, had I not been with him.

Why then would I consciously choose to bring a daughter into this world, knowing full well that I could be exposing her to what I have been exposed to? Why would I choose to open the doors to the potential for boundless suffering? Keeping her seemed to be an act of pure selfishness.

Selfish, you see, because I did want her. I wanted her with all of my heart.

I deeply regretted having the amniocentesis. I regretted knowing that she'd be coming with Down syndrome. My angst over our decision to keep her consumed me, kept me awake for most of my pregnancy, endless insomnia. Night after night I'd relive my own most horrific memories, wondering if I made the right choice, if I had simply conscripted my daughter to a life of misery.

Scared, too of Down syndrome and of intellectual disability, I pored over personal blogs, memoirs, articles – anything and everything to ease my fear of that unknown.

I envied people that had a birth diagnosis because I felt that at least they could hold their baby as they wept or dealt with grief. Me? I had to wrap my arms around my moving belly and walk alone amongst the dark thoughts in my own head.

Walking among all the dark thoughts in my head served its purpose though. I finally realized that my daughter's life is her own and not mine. Her path is fresh and clear and her disability is not mine. The way the world sees her and the way in which she will move and grow will be different from me. As Gibran says,

They are the sons and daughters of Life's longing for itself.

They come through you but not from you,

And though they are with you yet they belong not to you.

The grief that enveloped me for so much of my pregnancy also served a purpose: it purged me of anything other than my thorough joy and delight in her existence. 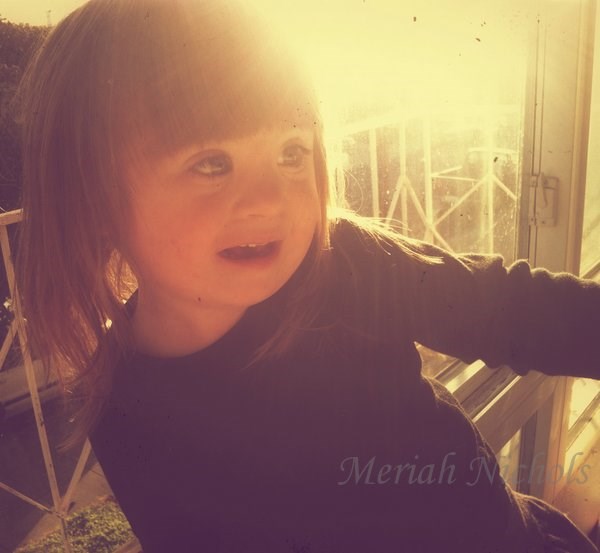 Light of our lives.

Meriah Nichols is the travel-hungry deaf mother of three. She writes about disability, travel and parenting on her blog, "With a Little Moxie" (www.withalittlemoxie.com). She is currently preparing to embark upon the Pan American Highway (from San Francisco to Chile) this year.

Disability; Pregnancy
January 31, 2013 at 5:41 am
To add a comment you need to be a registered user or Christianity Today subscriber.