Home > 2013 > January
Mommy, What Does Forgive Mean?How fighting with my son and a murder case in Florida helped me understand more about God's grace.Amy Julia Becker
expand 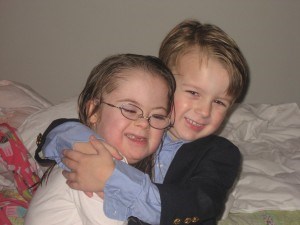 It's an unfortunate theme of my life these days, and therefore an unfortunate theme of this blog, that I frequently fight with my son. Much of the time, we get along really well. He slips his warm hand into mine as we walk down the hallway of his school. He scrambles to my room to help me pick out my "fancy clothes" when I'm headed out to dinner in a restaurant. He puckers up his lips for a kiss goodnight, good morning, and goodbye. But we also fight. Far too often.

The most recent one came last week, on our first day back at school. He and Penny were goofing around instead of getting dressed. I was tired and cranky and the clock was ticking and pretty soon he wasn't laughing anymore. I yelled. I threatened. He cried. I threw things. He cried some more. And eventually I crumpled, and held him tight, and a long time later he got dressed. Once we had both calmed down, I said, "William, I'm very sorry that I got so angry and yelled at you. Will you forgive me?"

"What does forgive mean?"

"It means it's okay between us."

But I wasn't at all satisfied with my answer. I didn't want William to think I was asking him to approve of my actions. They were wrong, and there was no way to change them or make them better.

A few days later, he asked again, "What does forgive mean?"

And I had a chance to try again. "It means that even though someone has done something wrong, you won't stay mad at them and you won't try to make them feel bad about doing something wrong. It means you will be friends with them again, even though they hurt you. Just like God forgives us and loves us even though we do wrong things all the time."

The next day, I read an article in the New York Times Magazine: Can Forgiveness Play a Role in Criminal Justice? It describes a young man who killed his girlfriend and then the work her parents have done in order to forgive him and even to see their forgiveness reflected in his sentencing for the crime. I recommend the whole article, but I was particularly struck by their description of the decision to forgive:

The Grosmaires said they didn't forgive Conor for his sake but for their own. "Everything I feel, I can feel because we forgave Conor," Kate said. "Because we could forgive, people can say her name. People can think about my daughter, and they don't have to think, Oh, the murdered girl. I think that when people can't forgive, they're stuck. All they can feel is the emotion surrounding that moment. I can be sad, but I don't have to stay stuck in that moment where this awful thing happened. Because if I do, I may never come out of it. Forgiveness for me was self-preservation."

Still, their forgiveness affected Conor, too, and not only in the obvious way of reducing his sentence. "With the Grosmaires' forgiveness," he told me, "I could accept the responsibility and not be condemned." Forgiveness doesn't make him any less guilty, and it doesn't absolve him of what he did, but in refusing to become Conor's enemy, the Grosmaires deprived him of a certain kind of refuge — of feeling abandoned and hated — and placed the reckoning for the crime squarely in his hands.

William isn't old enough to hear about any of this, of course. But I hope in time I will teach him about how forgiving others brings relief, how receiving someone else's forgiveness prompts responsibility without condemnation, and about a God whose forgiveness is but the first step towards a life of freedom and joy. I'm sorry that I fight with my son, but I'm glad there is enough grace for us both.

Forgiveness; Grace; Parenting; Religious Freedom
January 10, 2013 at 6:45 am
To add a comment you need to be a registered user or Christianity Today subscriber.

Mommy, What Does Forgive Mean?

Mommy, What Does Forgive Mean?