Home > 2013 > July
Three Reasons Why We Might Not Want to Cure Down SyndromeScientists think they have discovered a way to "silence" the chromosome that causes Down syndrome. We should be jumping for joy, right? I'm not so sure.Amy Julia Becker
expand 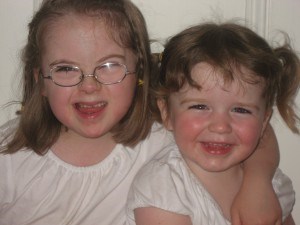 There's a new scientific discovery popping up on my Google alerts about a potential "cure" for Down syndrome. According to the Boston Globe (Scientists Hit at Core of Down Syndrome), "Researchers at the University of Massachusetts Medical School have shown that it is possible to do what had once seemed unthinkable — shut down the extra chromosome that causes the developmental problems and intellectual disabilities in people with Down syndrome." The Globe article details the science, but they also sum it up like this: "The gist of the discovery is this: People with Down syndrome are born with three, not the usual two, copies of chromosome 21. The UMass team found a way to suppress the expression of that extra chromosome, raising the possibility that eventually, a similar shutdown could be engineered in people, perhaps short-circuiting some of the manifestations of Down syndrome."

They predict that this discovery will be able to be applied to humans within ten years and that it will be most effective if applied in utero.

We should be jumping for joy, right?

I guess I should start by saying that I'm not categorically opposed to this research. Babies with Down syndrome miscarry at higher rates than others. There is a higher risk of leukemia and heart defect and Alzheimer's for all people with Down syndrome, not to mention the more minor problems of vision problems and hearing deficits and the murky question of whether or how intellectual disability constitutes suffering.

But I should add that on the whole, this research has me worried. I'll try to explain why:

1. Any attempt to "cure" Down syndrome (which is not a disease) assumes that the problems that come along with Down syndrome are located within the individuals with Down syndrome rather than within our society at large. Yes, there are physical and cognitive delays for kids with DS that can result in actual suffering, but the majority of people with Down syndrome report good lives and positive experiences for their families. I'm sitting in a public space right now and many people within view are wearing glasses. None of them would be categorized as "disabled," even though they presumably have impaired vision. Without their glasses, some of them would be bumping into things and potentially harming other people. With their glasses, those problems disappear. On a much broader scale, disability in general ceases to be disabling when accommodations are put into place and when social stigma no longer accompanies said disability. (Read more in The Social Construction of Selective Abortion) 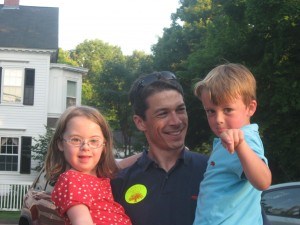 2. Silencing the third chromosome in trisomy 21 assumes that Down syndrome is categorically negative. Again, the list of potential challenges is long. Potty training takes longer. Teaching a child to be safe takes longer. And that's not to mention doctor's appointments and therapist visits and whatever health concerns come up along the way. And yet, though I haven't found the scientific study to substantiate this claim, I have a sense that there is something positive about having Down syndrome. Something beautiful and good and true. Something that increases joy. In our case, something that gives Penny a kinder heart, an ability to love others more purely. People often stereotype individuals with Down syndrome by calling them "sweet" and "angels," and anyone who knows a person with Down syndrome can contradict that claim. But anyone who knows someone with Down syndrome can also so there's something to it. I think my concern here is that to take away the third chromosome is to take away more than Penny's ear tubes and pronated feet and impulsivity, but rather it is to take away something essential to who she is (Read more in an earlier post: Grateful for Down Syndrome?)

3. From a more spiritual perspective, I worry about human tinkering with our genetic code, which is to say, I worry about "playing God." I believe that God has entrusted us with the responsibility to attempt to heal and care for people with afflictions that cause suffering. I'm grateful for penicillin and vaccinations and cancer treatments and the like. But I'm not convinced that Down syndrome constitutes suffering (see News Flash: Not Everyone With Down Syndrome is Suffering), and I worry that these types of therapies will put parents in an impossible position of having to chose in utero whether to alter the genetic makeup of their children. I am reminded of the film Gattaca, in which Ethan Hawke plays a human whose parents allowed him to be born "naturally." As a result, he has been deemed insufficient for higher-level jobs. Many dystopian fantasies imagine the world toward which we are heading–a brave new world absent of joy, in denial of human limitations and interdependency, worshiping the twin holy grails of physical perfection and economic productivity. 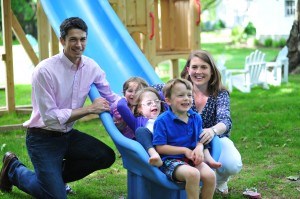 I've said it before, and I will say it again: I am grateful for Penny, for her limitations and her gifts, just as she is. And as much as I would love to make aspects of her life easier for her, my work towards that goal comes by way of teaching her and advocating for others to receive her as she is and support her in who she is becoming. I want Penny (and Cade and Ravi and Emily and Grace and all the other children with Down syndrome we know) to have the support she needs to become the woman God has created her to be. And I am not at all convinced that taking away her third chromosome will help us achieve that goal.

Down Syndrome; Genetic Engineering
July 24, 2013 at 12:31 pm
To add a comment you need to be a registered user or Christianity Today subscriber.

Three Reasons Why We Might Not Want to Cure Down Syndrome

Three Reasons Why We Might Not Want to Cure Down Syndrome