Home > 2013 > March
A Complete Family: How I Ended Up with Two Children with Down SyndromeOne mother's story of having two children with Down syndrome in Monterrey, Mexico: "Sometimes things do not happen the way we want. Sometimes it happens better." Amy Julia Becker
expand 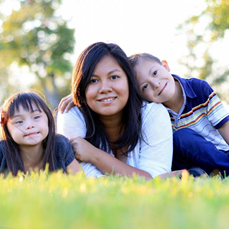 Photo of Alicia and her two children by photo style

My name is Alicia Llanas, I'm 29, and I live in Monterrey, México with my husband and two kids, Elías (8) and Eva (5) both with Down syndrome.

I had a smooth pregnancy and it was a surprise finding out our newborn had Down syndrome. We were not angry at God, and we didn't ask "Why me?", but the fear of raising a boy with disability was huge. I thought he would never have friends, that people would mock him, that he would not learn to read and write, he would not go to school, and would never get married have kids, and maybe he would die at young age. I was worried what people would say about us and whose fault it was.

I don't know where all these thoughts came from, why I had that dramatic picture, since I had never met someone with Down syndrome.

"Is going to be an angel, whom will not know evil, and will live  with you forever," the OB said after Elías was born. Although it sounded beautiful, I didn't wanted an angel. I wanted a son that could enjoy life and have the oppportunities that everyone has.

We were on a road that no one we knew had taken. We didnt knew where to go, or where to start, but we knew we had to do something, and we wanted to be the parents he needed and deserved.

I have learned to be the mom my kid needed. The knowledge of Internet and English has been a life saver. I have learned a lot from talking, reading and asking others who are on our same road.

Since Elías was born people recommended that we have another kid so they could grow together and so Elías could learn from his sibbling. We didn't wanted to have another kid just to "help him," but also I was afraid of having another baby with Down syndrome. I was fine with one. But two? No thank you!

But God had another plan. I found out about Reece's Rainbow (an organization for people who want to adopt children with Down syndrome) in 2007. I thought adopting a kid with Down syndrome was a crazy idea. Then one day in 2008 I saw a boy listed for adoption in the Ukraine and felt he was meant for us, but my husband though I was crazy. I prayed and God told me to wait, that He would change my husband's heart. My husband thought that since the adopted kid wasn't ours, he would never love her/him. It's a pretty common thought in my country.

Then at church we had new friends who had a toddler girl, and this girl loved my husband, and soon my husband knew that living someone that wasn't "his" was possible. By this time it was 2009. My husband told me he was open to adopting but not from other country, not from other state, it had to be from here.... At this moment we were more than comfortable with one kid. And we saw in the government adoption agency website that to adopt you have to be infertile and not have biological kids, so we though maybe adopting wasn't for us.

Meeting Eva at the orphanage

We know God prepared us to really welcome Eva as our daughter. It was instant love, like we found the one we didn't know we were missing. She completes our family.

Both our kids are included in typical public schools. Elias is in 2nd grade and Eva is in kindergarten. Our kids are able to live, learn and enjoy school. Every Mexican kid with Down syndrome has this right, but lamentably there is still much ignorance, laziness, fear, and lack of resources.

I have taken courses, read, asked and learned so I could teach my kids, and teach the teachers a different way to teach kids. The big excuses are time, money and distances for many of us, but the Internet has become a great tool for many of us, so I want to be part of helping others that our kids can learn to be potty trained, talk, read, learn numbers, etc.

The fear I had once now has changed. I do not know what my kids will do when they grow up but we know that they will enjoy life and have the opportunities everyone has, because day by day we are giving them the chance to embrace life and to learn different things.

Sometimes things do not happen the way we want. Sometimes it happens better.

Down Syndrome; International; Mexico
March 20, 2013 at 12:36 pm
To add a comment you need to be a registered user or Christianity Today subscriber.

A Complete Family: How I Ended Up with Two Children with Down Syndrome

A Complete Family: How I Ended Up with Two ...