Home > 2013 > March
Two-Headed Baby Born in Brazil (Guest Post by Margot Starbuck)"Throughout the gospels, Jesus not only does not retreat from those his culture considered other, he beelines toward them!" Author Margot Starbuck challenges us to consider following Jesus by embracing the "other..." Amy Julia Becker
expand 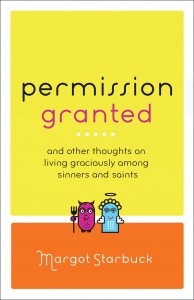 "Though something in my gut told me not to click on the headline, curiosity trumped virtue. I have always been wildly curious about multiple births and other birthing anomalies, and the headline promising a two-headed baby could simply not be ignored. With a single click I was staring at a thick, healthy baby that had been born in Brazil with two heads. Although I'd watched the special cable TV documentary on Britanny and Abigail Hensel, conjoined teens in Minnesota living full lives, my heart fell when I saw these joined babies.

Parents and doctors had been expecting twins, but just moments before delivery doctors realized that they would be delivering conjoined twins. The Brazilian infants, with separate functioning heads, shared a number of vital organs. Each, though, had its own spine and head. Two individuals had been fused in one body.

My mind quickly raced through the possible interventions and outcomes available for these very unique children. Had the mother had early access to medical imaging, I mused, and had the condition been diagnosed earlier, the pregnancy might have been terminated. Many are. I also knew that some conjoined twins could, at a certain optimal point of physical development, be medically separated. I suspected, though, that the multiple shared organs in the Brazilian babies would render this scenario impossible. In some cultures, the twins would be abandoned, exposed to the elements, and left to die. With the high-publicity surrounding this case, though, that seemed doubtful.

The most primal, shameful, instincts of my gut were to eliminate them, assimilate them, or abandon them. My initial response was not particularly Christian." (from Permission Granted: And Other Thoughts on Living Graciously Among Sinners and Saints)

Though I set out to write a book about how the Church treats those identified as "Special Sinners"—exotic dancers, addicts, prisoners and drag queens, among others—somewhere along the way I realized that that the often-subjective "sinner" category was a smaller slice of the larger pie: who are simply other.

In his brilliant Exclusion and Embrace, Miroslav Volf identifies the natural impulse of many toward those who are "other"—the Brazilian conjoined twins, someone of a different race or economic bracket, immigrants, etc.—as three-fold.  When we encounter the one who is other, our natural inclination, as mine was, can be to eliminate, assimilate or abandon.

I think especially of some of my older friends with disabilities.  When they were born, fifty or sixty years ago, the advice of the medical community was to institutionalize them. The prevailing opinion of the day, during the 1940, 50s and 60s, was that everyone—individuals, parents, siblings—would be better off if these children were separated from their families. While, for some, the decision made sense, many others were separated from the communities whom they might have blessed and been blessed.

Whoever we designate as "other" will be different for each one of us. For instance, if I see a young adult with Down Syndrome, on a bus or at the grocery story, my first thought is, "Friend!" I know that's the not the case for everyone. The one who seems, to me, to be other might be someone of a different ethnic group or someone who is ninety-eight years old or someone who works driving a truck cross-country. For the eco-activist, the one who is "other" might be the lumberjack, chopping down trees to feed his family.  For the very conservative fundamentalist it might be whoever is waving a baton at the front of the local Gay Pride parade.  For the military general, it might be the granola-eating peace-loving hippy.  For the political progressive, it may be the sister-in-law who is a disciple of Anne Coulter.

For many of us, the natural impulse when we encounter someone who is radically other is to pull away. Avoid contact. Lock our doors. And yet, those of us who are Christians are meant to take our cues about how to engage the other from the person of Jesus. Throughout the gospels, Jesus not only does not retreat from those his culture considered other, he beelines toward them!

Sadly, Christians are often tempted to whitewash Jesus' encounters among those who were radically other.  We convince ourselves that a dirty no-good tax collector, the disgusting equivalent of a modern pimp or dealer who sells out his community, is sort of like…working for the IRS.  We conveniently believe that a rejected Samaritan woman who's had five husbands is sort of like…the divorced woman in our upscale neighborhood. We completely miss the radical nature of Jesus' preference for outsiders which so infuriated the religious. When Christians actually pattern our lives after the radical witness of Jesus, we'll move out of our comfort zones and toward others.

The Brazilian mama who gave birth to conjoined twins in 2011 named them Jesus and Emmanuel.  Emmanuel means "God is with us." If they are anything like their namesake, the arms they share will reach out, toward some other, in embrace.

Who are you tempted to eliminate, assimilate, or abandon? How have you (or might you) overcome those instincts? Leave a comment on this post or these questions, and you'll be entered in a drawing to receive a free copy of Margot's new book. Winners announced on Friday, March 22.

Margot Starbuck is excited about the recent release of Permission Granted: And Other Thoughts on Living Graciously Among Sinners and Saints (Baker). Connect with Margot on facebook and read the intro to Permission Granted at www.MargotStarbuck.com!

Disability; Down Syndrome; Grace
March 14, 2013 at 5:54 am
To add a comment you need to be a registered user or Christianity Today subscriber.