Home > 2013 > November
A Broken Bracelet, a Wise Little GirlHow would you respond if a bracelet broke by accident? Here's what I learned from Penny.Amy Julia Becker
expand 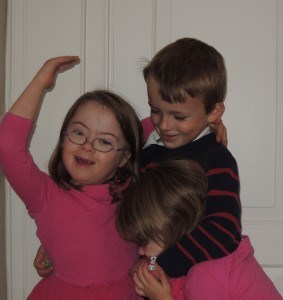 Somewhat spontaneously, we decided to go through Penny's memory box tonight. She spied it upon her dresser and brought it to the sofa in their room. She and Wiliam both decided that viewing its contents trumped reading the final chapter of Prince Caspian. So we leafed through photos of her as a newborn, a cross given to her upon her baptism, letters from her great-grandfather, a note from me, a letter from her dad, the hat from her birth in the hospital, and we came upon a pink silk bag.

It contained a pearl bracelet and necklace. Nothing particularly expensive, as they had come back from China with friends who were visiting. But Penny happily and immediately put the bracelet around her wrist and asked me to clasp the necklace. They were lovely, and that mattered to her.

Not too long after that, she decided to take them off for her night's sleep.

"Mom, the bracelet broke. It was an accident."

I looked at the floor, the little white beads scattered all over the navy blue carpet.

She shrugged. "I was taking it off and it broke. It was an accident."

"Then I would feel bad."

It was an accident. Her bracelet broke. It's not the end of the world.

There is much for me to learn from my daughter.

Children
November 26, 2013 at 5:45 am
To add a comment you need to be a registered user or Christianity Today subscriber.