Home > 2013 > November
Our Children, Collectively (a guest post by Jennifer Grant in honor of National Adoption Month)"When we adopt a child, whether she was born in a land far away (as my daughter was) or in the next county, we are claiming responsibility for those who are smaller, more vulnerable, and who do not live within the loving care of a family."Amy Julia Becker
expand 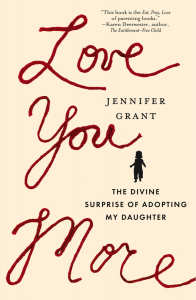 "The beggarly question of parentage – what is it, after all? What does it matter, when you come to think of it, whether a child is yours by blood or not? All the little ones of our time are collectively the children of us adults of the time, and entitled to our general care." –Thomas Hardy (from Jude the Obscure)

Over hot chocolate on a chilly autumn day, my son and his friend concocted their survival plan in the event of a zombie apocalypse. If their families were dead or had "turned," they would make their way to the marsh, a wetland area just west of where we live. They could hunt deer or coyotes for food and hide in the massive oaks if pursued by the undead. They planned their route, noting at which houses they could take refuge or from whose garage refrigerators they could "snag" cans of soda if they were desperate for something to drink.

I listened in from a few feet away in the kitchen, invisible to them, just the mom making pasta. But it struck me that knowing our neighbors was an integral part of their escape plan. (Of course, the variable that they couldn't predict was which ones might have already been bitten.)

They are fortunate to live in a neighborhood where adults feel a responsibility to care for children, and not just their own. Last summer, for example, a friend who lives a few blocks from me posted the following status update on Facebook:

"I've just let the boys walk down to the Popcorn Shop on their own for the first time. Keep an eye out for them, if you would." No one was tagged or mentioned; it was just a general announcement.

When I read it, I texted my 13-year old daughter who was in our little downtown area with friends. She sometimes babysits these boys and knows them well.

A few minutes later, she responded. "They're good. Just saw them in front of the ice cream shop. Look happy."

I shared that update under the original post. And, over the course of the afternoon, others commented.

"They're sitting by the fountain at Adams Park."

Finally another neighbor wrote, "They're on their way home. Just passed our house going in your direction."

Later, their mom wrote: "Thanks friends. They're back safely. Wanted to give them the freedom to explore on their own, but hoped they wouldn't get lost. Glad to know you're all out there."

In my neighborhood, we do keep an eye out for each other's children. One of the common threads that connects us is our hope that our kids will grow up to be people who care for others, and not become adults who keep the shutters closed and only care for the children who live within the four walls of their homes. We want them to be outward-looking people who protect those who are younger or more vulnerable than they are. My friend the parenting guru Amy Hilbrich Davis has a family motto she often shares with her seven children.  It's simple: "Big Takes Care of Little."

And, in some ways, that is one useful way to understand adoption. When we adopt a child, whether she was born in a land far away (as my daughter was) or in the next county, we are claiming responsibility for those who are smaller, more vulnerable, and who do not live within the loving care of a family. We are saying that even if a child is a different race than we are, even if he won't inherit our dimples or the cleft in our chin, and even if that child has been through neglect or trauma that makes him or her a challenge to parent, Big Takes Care of Little.

November is National Adoption Month. This month, let's consider how we might take responsibility and care for children who lack families, whether they live in the U.S. or abroad.

The children in the world are entitled – to use Hardy's words – to our protection and care. 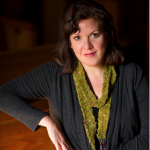 Jennifer Grant is the author of Love You More: The Divine Surprise of Adopting My Daughter, MOMumental: Adventures in the Messy Art of Raising a Family, Disquiet Time: Rants and Reflections on the Good Book by the Skeptical, the Faithful, and a Few Scoundrels (co-editor, forthcoming, 2014), and 12: A Daybook for a Wholehearted Year (forthcoming, 2014). She is a grateful believer, a reader, a sometime poet, a dog lover, and, with her husband of 25 years, mother to four wonderfully creative and quirky tween and teenaged children. More at jennifergrant.com.

Jennifer Grant's memoir, Love You More (in e-book format) is now on sale for just $1.99 for National Adoption Month. Click here to read more than 130 customer reviews, endorsements, and to order.

Adoption; Parenting
November 11, 2013 at 5:14 am
To add a comment you need to be a registered user or Christianity Today subscriber.

Our Children, Collectively (a guest post by Jennifer Grant in honor of National Adoption Month)