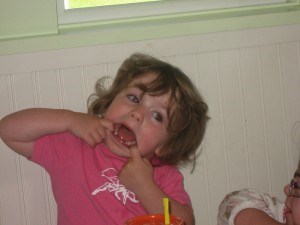 Anne Lamott said it, not I, but I know the truth of which she speaks.

The wheels came off the vehicle that is our family yesterday. Marilee was up late and awake early. William was up for an hour in the middle of the night in eager anticipation of the tooth fairy. I was restless already because Peter was out of town. A friend called to tell me about how Penny had been mean and rude the day before. I got an email from a babysitter about how difficult our children were at bedtime. (Incidentally, neither of them was tattling–I could tell something had gone wrong in both cases, so I asked for the follow up.)

But I think there were some people praying for us.

Because somehow, we laughed a lot yesterday. I can't even remember what it was that gave Marilee reason to say, "You silly Mommy!" and fall into my lap with giggles. I can't remember why Penny and William were rolling around in hysterics. But I know it was good. And I know it was undeserved and unexpected. Which makes me inclined to think that it was holy.

Holiness
September 25, 2013 at 2:00 pm
To add a comment you need to be a registered user or Christianity Today subscriber.