Home > 2013 > September
DisabilitySeptember 09, 2013
What a New Guinness Ad Has to Do with My Son and the Word IncludeWilliam asked me what it meant to include his friend. Sometimes I'm not so sure we understand it, even as adults. But here's one picture of true inclusion. Amy Julia Becker
expand 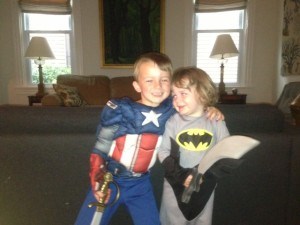 "Mom, everyone keeps using the word include, but I don't know what that word means."

I had just finished a gentle reprimand because William and his friend had refused to let another friend into their fort. "Remember, William? We always include our friends." I thought the message had gotten through earlier in the day, but apparently his wide-eyed nod was just an attempt to appease me.

"Put it inside the circle?" he says.

"There are lots of choices–I could put it inside the circle. I could make the circle bigger. Or if I'm the cup or the pizza crust, I could leave the circle to go be with the knife."

He is smiling now, but it's not the smile from before. This time, there's a sparkle in his eyes, as though he understands and wants to try to make it happen. Next step is just to see if the pizza crust, straw cup and knife illustration can be put into practice.

I wish I could say there are plenty of examples of adults including people–adults who have broken through social barriers, adults who know how to include an elderly person with an oxygen tank or a young person in a wheelchair or a child with learning disabilities. But too often adults demonstrate similar ignorance to William's–we don't know how to include one another, and so walls go up and people end up in distinct categories instead of recognizing common humanity.

I just saw an example of how some adults put inclusion into practice. This will take one minute of your time and it is well worth it:

Aside from the fact that this ad is one of the best illustrations of positive masculinity I've ever seen, it's also a touching and meaningful illustration of inclusion. The men in this commercial left the circle to go be with the knife. And they did so, not out of pity or even obligation, but out of friendship, love, and thoughtfulness. I hope my son will grow up to willingly do the same.

Alcohol and Drinking; Sports; Tolerance
September 09, 2013 at 9:28 am
To add a comment you need to be a registered user or Christianity Today subscriber.