Home > 2013 > September
FaithSeptember 05, 2013
Why Aren't Christians Flooding Yoga Retreat Centers?I was a little weirded out by the buddhist figurines and the chanting and the incense. But by the end, I was convinced that Christians should be flooding yoga retreat centers...Amy Julia Becker
expand 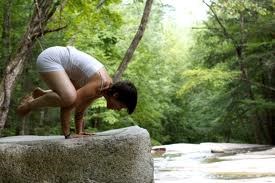 In early July, I went to Kripalu, a yoga center in the Berkshire mountains, for a two day retreat with an old friend. Not only did we practice yoga three times a day, we also ate copious amounts of healthy food, enjoyed the sight of the mountains and the lake, talked and talked and talked as only women who have been friends for years can do, and reveled in the peace and spaciousness offered by that place. I wrote a few chapters of my next book. My friend read a few books for work. It was a glorious, God-given time.

As yesterday's post attests, I practice yoga and I defend that practice from a Christian perspective (with caveats). But I've never done so in the context of a yoga retreat center, and my friend (who is also a Christian) and I talked a lot about how to maintain our spiritual integrity in that place. We were surrounded by symbols from Eastern religions. The instructors often invited us to chant "om" or other words that, roughly translated, meant things like, "I access the divine wisdom in me." Or even, in one case, we were invited to look in the mirror and say, "Hello, God." (I declined.) I walked the labyrinth one morning. It was a lovely time of prayer–the path reminded me of the circular nature of our journeys with God and the need to trust that it actually leads in a purposeful direction. And then I made it to the center, an altar to a figure of the Buddha, complete with rotten fruit that had been offered, I supposed, to the gods.

Let's just say it all made me a little uncomfortable. There was a part of me that wanted to bolt back to my more secular yoga studio where I can engage for 90 minutes each week and ignore the incense and chanting and figurines.

By the end of my time at Kirpalu, though, I was convinced that Christians should be flooding yoga retreat centers. Yes, I think Christians should go there because we have something to offer. We have a name for that ancient wisdom. We have a face for that divine spark. We have a story to tell that counters the tale I overheard at dinner one night from a woman who was explaining how aliens have invaded our planet and left seeds of wisdom for us to discover.

And yes, I not only think we have permission to go into such places but in fact models from Scripture. Paul's letters are riddled with advice about how Christians can and should interact with pagans–how they should conduct business in the pagan temple, whether they should eat food sacrificed to foreign gods. Certainly these opportunities require discernment. But they are also exactly the places Jesus sends us to be salt and light. (And note, on the salt and light bit, that salt both enhances flavor and preserves what is already good. Light reveals what is already there. Our witness as Christians is about revealing the fullness of God, who is known in bits and pieces here and there and everywhere.) We ought to go to these places as an act of witness and service and obedience.

BUT ALSO, I think Christians should go to places like Kripalu because we have something to receive. The practice of yoga has enhanced my ability to see God at work in different cultures. It has given me a sense of the significance of the body and the connections possible between body, mind, and spirit. It has taught me how to incorporate breathing into prayer and mindfulness into reading Scripture. It has helped me recognize the image of God that is present in all people.

Yoga retreat centers are a mission field, in which the missionaries should expect to be transformed by the work of God's Spirit even as they attempt to invite others into the Spirit's transformative work.

I hope I'll head back next summer, prepared to encounter God and to invite others into the fullness of God's glory.

Wisdom; Yoga
September 05, 2013 at 3:39 pm
To add a comment you need to be a registered user or Christianity Today subscriber.