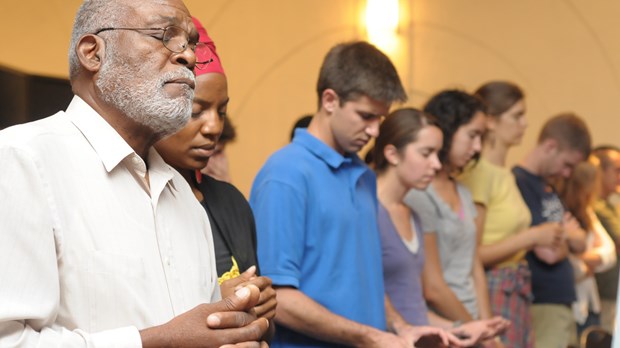 I will never forget sitting at the dinner table with a group of college friends when one of them, a white young man I didn't know all that well, made a disparaging remark about taking a "big black girl" to an upcoming formal dance. I didn't laugh along with everyone else. But I didn't speak up either.

I was an African American Studies minor, and in one of my classes we had a chance to write a short reflection each week. I wrote a personal essay about how ashamed I was that I hadn't said a word at the dinner table that night. My professor called me into her office. "You have to pick your battles," she said. "That one wasn't worth it." At the time, I appreciated her generosity, her faith that I would somehow have the wisdom to know when to raise my voice and when to stay silent, her confidence that when the right time came I would indeed speak the uncomfortable words. And yet I still, nearly twenty years later, think I should have said something.

And here's why. Because I am a privileged white person who does not have to fight this battle every single day. Because I can retreat to my safe world of education and financial stability without even thinking of it as a retreat. Because when people look at me and see sandy hair and green eyes and freckled skin, they assume positive things about my character. The least I can do is speak up on the rare occasion that opportunity arises. The least I can do is participate from the sidelines on behalf of the men and women who walk into a battle of presumption and prejudice every single day.

Am I overstating the situation for those whose skin is not as lightly pigmented as mine, whose ancestors did not hail from Western Europe? A quick glance at news the past few weeks suggests I'm stating it accurately. There's the African American single mom who writes about her 3-year old who has been suspended from preschool five times while his white peers who display the same behavior have stayed put at school. There's the report that "Whites and blacks use marijuana at roughly the same rates; on average, however, blacks are 3.7 times more likely than whites to be arrested for possession," and that "blacks are more than 10 times as likely as whites to go to prison for drug offenses." Or even the article about the creation of a non-white doll, which apparently is unusual enough to warrant headlines. It's very clear to me that my position is one of privilege, and yet I often feel powerless to know what to do to care for the less privileged ones around me without seeming ignorant or patronizing or both. Perhaps those are risks worth taking.

I had all these thoughts in mind when I wrote back in June about Ta Nehisi Coates' article in the Atlantic about reparations for African Americans. In my own post—Should Christians Support Reparations for African Americans?—I tried to sidestep some of the political and social questions raised (due to my lack of expertise in these areas and to the many other opinions already aired in response to this article) and instead call attention to some of the spiritual issues at stake. To put it bluntly, most churches do not reflect Jesus' vision of the kingdom of God as a place where all nations and all races gather together to worship. And even if there are valid arguments in support of churches with a predominant ethnic group, still the wider Christian community often falters when it comes to demonstrating unity in Christ. Racial divisions remain not only on Sunday mornings but also in how we see one another, how we vote, and how/whether we care for one another.

My post about reparations drew as many vitriolic comments as it did constructive ones. And this negative reaction to even the topic of collective sin and responsibility when it comes to race within the church made me realize how divided we still are. But after much thought and prayer, I decided not to respond directly to the negative comments. Instead, with help from CT's managing editor, Katelyn Beaty, and my friends Helen Lee and Anna Broadway, I decided to try to begin a conversation here on this blog about race and the evangelical church.

I asked nearly two dozen leaders, pastors, and writers to contribute posts to this series. They all came from within the evangelical tradition, but they spanned the spectrum of ethnicities and included Latino and Asian, black and white, as well as both women and men. I asked them to respond to one of the following questions:

1. From the perspective of race relations, what has your experience within evangelical churches been like? What has been challenging? What has been encouraging?

2. What could Christians do to foster racial reconciliation and healing within churches and the broader culture? What practical barriers exist and what practical solutions--political, social, economic--can you propose?

Over the course of the next three weeks, I will be running the responses I received from about a dozen men and women from all over the country and from a tapestry of ethnic backgrounds. Their essays cover topics including church worship styles, interracial dating and marriage, the recent mortgage crisis, confessions of racism, a vision for unity in Christ, and much more. These posts won't solve the problem of racism within the church or within our culture, but I hope they will begin to build bridges among those of us who might otherwise never engage these topics. As Pastor Michael McBride writes, Jesus is the one who sees us for who we are and loves us as who we are. I hope you will join me in receiving these experiences and these suggestions over the course of the next three weeks. And I pray that these words might help us have eyes to see one another and to love one another as Christ loved us.

African Americans; Racism; Reconciliation
August 01, 2014 at 1:41 pm
To add a comment you need to be a registered user or Christianity Today subscriber.

Introducing My Blog Series on Race

Introducing My Blog Series on Race