Home > 2014 > August
White Christians: It's Time to Stand in Solidarity With Your Black Brothers and SistersThe history that led us to Ferguson. A guest post by Christena ClevelandAmy Julia Becker 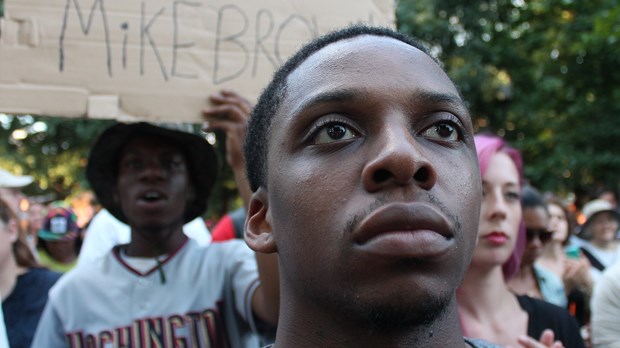 The lynching of black people continued for 60 more years.

In 1963, in his Letter from Birmingham Jail, Dr. Martin Luther King, Jr. also sounded the alarm, calling upon white Christians to stop criticizing the black civil rights movement and instead begin investigating the racist conditions that produced it. He wrote, “It is unfortunate that demonstrations are taking place in Birmingham, but it is even more unfortunate that the city’s white power structure left the Negro community with no alternative.”[ii] By and large, white Christians ignored his plea. Their “whites only” version of the gospel didn’t require them listen to the perspectives of black people or defend the lives and dignity of their black brothers and sisters.

Just last summer, after George Zimmerman was acquitted in the death of Trayvon Martin, many black Christian leaders did triple-duty. In addition to leading activism efforts in our local communities and providing pastoral care to those devastated by the verdict, we also took to Twitter, blogs, pulpits and conference podiums to call upon white Christians to wake up to the reality of racism in America. I wrote a widely-read piece for Christianity Today, asking white Christians to examine their privilege, recognize that racism persists, humbly listen to black perspectives on race, and follow Jesus’ footsteps by standing in cross-cultural solidarity with black people. A number of white Christians responded to the alarm, but prominent Christian justice leaders of diverse cultures and denominations perceived a general lack of engagement from white Christians.[iii]

It seems that, in the midst of black Christian outcry in 2013, the majority of white Christians pressed the snooze button on racial justice, sleepwalking into their churches where an individualistic gospel that doesn’t call them to say or do anything about racial injustice is preached, where white culture, rather than Christ, reigns supreme, and where the problems and perspectives of black people are ignored.

One year later, Michael Brown was killed, the black citizens of Ferguson took to the streets in protest, and Army tanks descended upon them.

In Ferguson, the racial schisms that have plagued the U.S. for centuries have erupted yet again. Recent data from the Pew Research Center, confirms that black perspectives on Ferguson greatly differ from those of whites. For example, 80% of blacks say that Ferguson raises important questions about race, compared to only 37% of whites. This fundamental difference in perspective affects whites and blacks’ responses to Ferguson. For example, many blacks have spoken out about ongoing racial injustice in the U.S., saying that Ferguson could happen and does happen all over America. In other words, Ferguson is America. However, most whites, like their ancestors, have chosen to ignore black people’s cries of racial injustice. Instead, many whites have responded with silence/obliviousness or by attacking the black community. If anything, whites tend to believe that Ferguson is an anomaly, a rare occurrence that blacks probably brought upon themselves.

The American church, plagued by its own racial divisions, offers little in the way of healing and hope.

Brothers and sisters, it was never meant to be this way. The unified, interdependent, diverse family of God is designed to model Christ’s love to our broken world and in doing so, collaborate with him in healing our world.

The gospel calls us not only into individual faith in Christ, but also into the multi-racial family of God (Matthew 12:50) in which everyone has value and a voice, and those who were biologically born into higher status races (e.g., whites) intentionally listen to and stand in solidarity with those who were biologically born into lower status races (e.g., blacks) (Luke 13:30; Philippians 2:5-8). In this new family, our big brother Jesus invites us to collectively embody the sacrificial and cross-cultural advocacy that he exhibited in his life and death. Following his lead, all Christians are called to love well across racial and cultural differences, choose to see the world from other people’s perspectives, search for and extinguish inequality in the church and society, advocate for each other, esteem one another, and live as true brothers and sisters (Philippians 2:1-3).

This is not a calling to be taken lightly. As a unified family of God, we are empowered to address the racial issues that are afflicting our world. Indeed, in United by Faith, theologian Curtiss DeYoung and sociologists Michael Emerson, George Yancey and Karen Chai Kim persuasively argue that the unified family of God is the answer to the problem of race in America.

White Christians, are you ready to wake up??? 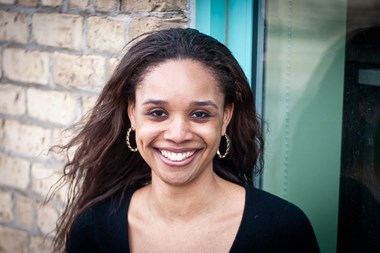 Christena Cleveland, Ph.D. is an associate professor of reconciliation studies at Bethel University in St. Paul, MN. The author of Disunity in Christ: Uncovering the Hidden Forces that Keep Us Apart, she blogs at christenacleveland.com and tweets @CSCleve.

Racism; Reconciliation
August 21, 2014 at 8:52 am
To add a comment you need to be a registered user or Christianity Today subscriber.

White Christians: It's Time to Stand in Solidarity With Your Black Brothers and Sisters

White Christians: It's Time to Stand in Solidarity ...