Home > 2014 > February
The Importance of Black History MonthConversations with my five-year old about the Olympics, the inner-city, and the “Silver War”Amy Julia Becker 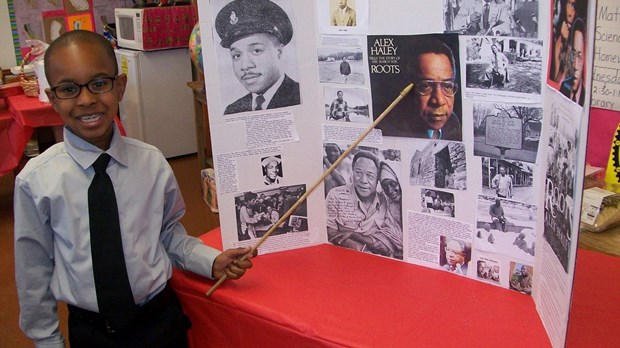 Last week my son William curled up against me on the couch as we watched the women's figure skating. "Which country is she from?" he asked.

"I don't know," I said, as she began what looked like an effortless glide across the ice.

"Well, she has whitish brown skin and black hair so I think she might be from Korea or China."

I said, "Mmmhmm," somewhat distracted by the lovely spectacle of this woman-from-wherever skating her heart out. But then I realized that many of America's past medal-winning skaters had "whitish brown skin and black hair." "William," I said, "people whose grandparents are from other countries can come to America and be born here and live here and be Americans. So the color of her skin doesn't really tell us whether she's an American or not."

He nodded, those big brown eyes absorbing this information. "Like Joshua at school," he said. "He has black skin because his grandparents are from Africa."

It turned out the skater was from Japan, so William's original observation wasn't that far off. And soon his thoughts turned to my grandparents and their origins (we've been in the Connecticut area since the 1600's) and to the thought that they probably grew up without seeing many bald eagles due to the "spray that killed a lot of them" in the past. The history lesson was over.

But that conversation with William was just one more in a series that began last summer. A group of my husband's best friends from college moved to a low-income neighborhood in Richmond, Virginia about a decade ago. We spent a week there in August, and Penny and William attended the neighborhood Vacation Bible School. William asked questions throughout our time in the city: "Why is there so much trash in the street?" "Why do people park their cars in front of their houses?" "Why is the music so loud?" and "Why do so many people here have brown skin?" Our friend said that his blonde-haired, blue-eyed daughter had asked the inverse questions the first time they traveled to suburbia. Our children aren't yet threatened by difference, but they are aware of it.

Then came the moment when we were folding laundry and William asked, "Mom, have you heard of a thing called the Silver War?"

I wrinkled my forehead for a minute. "Oh," I said, smoothing out a towel, "I think you mean the Civil War."

He nodded. I explained the word "civil" and how that applied to American history. He asked, "Why would the North and the South fight against each other?"

"Well, it had a lot to do with slavery," I said. I tried to explain the concept of slavery and why people would want to own people.

William said, "So they loved money more than people?"

"Well, yes, I suppose. And William, there was evil in their hearts which is always why people do wrong things."

He cheered, with a big grin and two fists pumping the air.

"But sweetie, people in the north had evil in their hearts too. Just because they won the war doesn't mean that they didn't have bad thoughts or actions towards others. Even now, we can have evil in our hearts and that evil can hurt other people."

He nodded, picked up his pile of laundry, and walked out of the room. Once again, lesson over.

On the last day of Vacation Bible School last summer the parents were invited to a performance for the kids to demonstrate some of what they had learned that week. They shouted about God's love for us. They cheered as a counselor performed gymnastics. They wriggled as another counselor, dressed as the Apostle Paul, talked about the Mediterranean countries he had visited. And finally, they stood up to sing: "There is power in the name of Jesus to break every chain, break every chain, break every chain."

And there they stood, white and black together, embodying the promise that God is working to break the chains of poverty and oppression and racism and discrimination, the chains of ignorance and privilege and power.

February is Black History Month. And on the surface of it, black history is not history that my white children need to know. And yet Black history is American history. Black history is human history. It is a history filled with sordid details, filled with evidence of the evil within the human heart as Africans sold one another into slavery, as Europeans and white Americans purchased human beings as if they were chattel, as white Americans abused and degraded these fellow human beings for centuries. But it is also a history filled with stories of hope and beauty and redemption, from a legacy of faith to works of art, music, and literature to social and political change that eventually led to the election of our first black President.

Black history is a history that tells us of our common humanity—of the sin and beauty that exists within each one of us, of the potential for hatred and the seeds of justice within us all. So I will continue my little history lessons as William asks his questions, and hopefully we will learn together how to be a part of God's work to break every chain.

Our friend Alex Mejias is a musician and lawyer in the Church Hill neighborhood of Richmond where we visited last summer. He and his friend Rashad Lowry (Shad-E) recorded an antiphon together based upon Psalm 27, "Whom Shall I Fear?" Click here to listen and download this song-- an ancient text in an urban context that exemplifies the themes of this post.

African Americans; Racism
February 18, 2014 at 6:10 am
To add a comment you need to be a registered user or Christianity Today subscriber.

The Importance of Black History Month

The Importance of Black History Month