Home > 2014 > June
Kids--Naked and UnashamedFor years, I’ve erred on the side of modesty. Maybe we need a little nudity after all.Amy Julia Becker 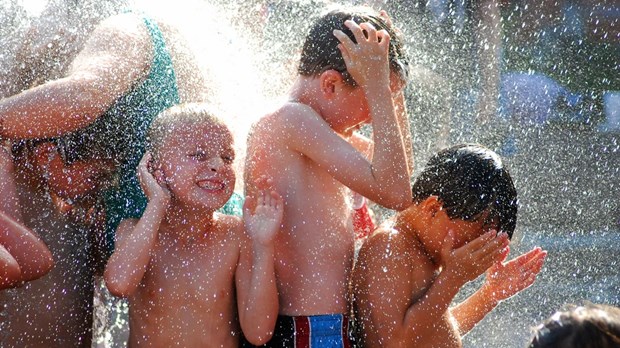 I've heard Christians say that if we still lived in the Garden of Eden, we would all be walking around naked. The story in Genesis 2 seems to support this idea. It was only after God confronted Adam and Eve about their tragic and rebellious decision to eat the fruit that they realized they were naked. It was only after that choice that they experienced shame. And so God, in a gracious and comforting indication of his ongoing love for them, clothes them even as he sends them out. Without sin, would everyone be naked all the time?

Perhaps we should start a Christian nudist colony, in which we all claim our status as the ones who need not feel any shame before God because of the work Christ has done for us. Or perhaps we should look forward to walking around naked in heaven. My kids would certainly be excited about that prospect.

I've always resisted the idea that we will be naked together forever, both for theological reasons and also, quite frankly, because I'd rather not bare my full body in front of anyone other than my husband on a regular basis. And I'd rather not see tons of other naked bodies all the time either.

Theologically speaking, the account I offered above oversimplifies the situation. As the story comes to us, Adam and Eve were the only humans in the garden, and they were a married couple. If other equally blissful couples had been on the scene, there's certainly a possibility that they would all wear clothes in public but feel no shame when they were naked in front of their respective spouses in private. Moreover, Adam's and Eve's nakedness acts within the story not just as a fact of their lives but also as a symbol of their sinless state. Their lack of shame extended not only—perhaps not even primarily—to their bodies, but more importantly to their very being.

Fast-forward to Jesus on the cross, and we find a naked man who bears the shame of the world, the sin of the world, and who then returns, clothed, in order to offer new clothes to his followers. Again, all this talk of nakedness and clothing operates not only on a literal level but perhaps more importantly on the level of our souls, encouraging us to know the freedom that comes in placing our lives in God's hands and turning away from focusing on ourselves.

And maybe that's all there is to it. God clothes us in righteousness, and we have every reason to keep our clothes on around one another too.

Still, I wonder whether there is something to the connection made between that physical experience of nakedness and freedom. Again, my kids seem to revel in being naked. They marvel at their physical being, even the things I seek to hide with clothing or makeup: their roly-poly bellies, their pale skin. I am starting to teach them about respecting other people by, say, changing their clothes in the bathroom rather than stripping down in public, but I'm trying hard to do so in way that affirms the pleasure and unselfconsciousness they experience in their bodies.

And then I read Zanthe Taylor's piece, "The Glories of Nudity," detailing her experience at a Korean spa in which mothers and daughters bathe naked alongside dozens of other nude women. As Taylor writes, "It was challenging to disrobe without feeling utterly exposed, but I didn't want to show my daughter I was fazed by it, so I stripped off and closed the locker door on my clothes." Her essay goes on to describe the freedom she felt in this experience, which was not in any way sexual in nature but rather an opportunity to see herself and other women without being ashamed of her body. She also describes the astonishing array of bodies all around her and how different it is to form a view of women's bodies from real women rather than magazine cover models. She never uses the word shame, and yet I was struck by how much the experience could help her form—for herself and her daughters—a positive understanding of her body as a good gift rather than a necessary but corrupted vessel.

Taylor isn't calling for public nudity. Just as I imagine Adam and Eve had boundaries on their shameless nudity, the Korean day spa has only one room for women that allows for this nude experience. But Taylor's essay challenged me to reconsider the role nudity might play in teaching my children, and my daughters in particular, to receive their bodies as good gifts from God that they can enjoy and use in service to others.

Family; Modesty
June 06, 2014 at 9:03 am
To add a comment you need to be a registered user or Christianity Today subscriber.