Home > 2014 > March
Anticipating World Down Syndrome Day: What I Admire About My DaughterHow Penny is helping me learn the secret of being contentAmy Julia Becker 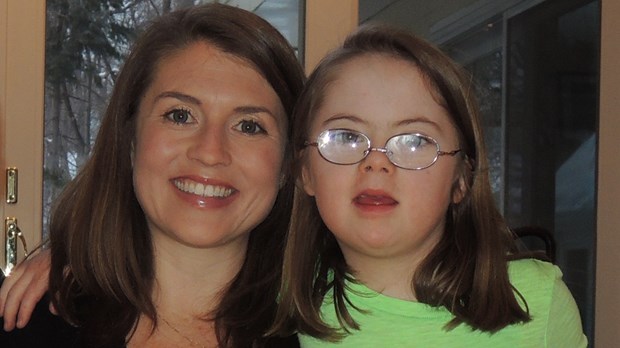 When Penny was diagnosed with Down syndrome at birth, I was sad and scared. The sadness and the sorrow dissipated with time, replaced by joy and hope. One of the reasons I began to have joy and hope for this baby I loved was because I began to believe that she wasn't defined by the list of delays and disabilities and diseases associated with her condition. I began to see that I was needy, just like she was, even if I was better able to hide my needs from the world around me. But I also began to see that her needs were only one part of her. She, like me, like everyone else, was also gifted—able to offer something to me and the world around her. I began to see that she was as human as anyone else—broken and beloved, vulnerable and able, one who could give and receive.

Friday marks World Down Syndrome Day, and this week I'm going to devote the space on this blog to offering some glimpses of life with Down syndrome. Everyday life. Ordinary life. In my family and around the world. And so today I want to begin with a little story to demonstrate just one of the ways that Penny has been a gift to me:

I was away last week on a business-trip-slash-vacation with my husband. And because I was away from them, I thought about my kids a lot. I thought about how Marilee, age three, has all of a sudden transitioned from toddler to preschooler—all done with diapers, talking about her best friend, taking my hand as we walk through the house together and saying, "God will always be with me, Mommy." I thought about how William, age five, has grown three inches in about as many months, how he has learned to read though he isn't confident enough yet to practice out loud, how he still wants to sidle up next to me on the couch in the morning. And I thought about Penny, age eight, with her visible pride at learning all her spelling words, her visible concern when her friend is home sick, her diligence in practicing piano.

But this time, I also thought about what might be Penny's most admirable quality, something in her that I want to cultivate in myself. See, Peter and I went away at the same time that our younger two had a week off from school. So while we were gone, Penny still went to school every day, while the younger two had adventures lined up: a nature center, a museum, a children's movement center with a bouncy house. The younger two ate lunch at restaurants and stayed in their pajamas all morning and watched television. Penny got up and got dressed and went to school. The admirable part wasn't only that she didn't complain. It was that she seemed to take genuine delight in the fact that her younger brother and sister were able to do exciting things all day.

She's the same way when it comes to playing games together. It's not that she wants to lose. It's that she demonstrates genuine support when someone else wins. When Penny wins, William throws the Uno cards across the room in despair. When William wins, Penny claps for him. Penny's gracious attitude seems effortless. It seems as though it is a gift God has given her –a lack of jealousy, a lack of competition that translates into an ability to encourage and care for other people.

I should be clear: Penny has plenty of struggles. We come close to fighting every day because she takes longer than anyone else to get through the morning routine. She gets mad at me when I won't give her time to read one more page of her latest book. She annoys her little brother by singing loudly in bed after the lights go out. She has an impulsive habit of taking small objects that belong to other people and hiding them. I guess she's like all of us—strengths and weaknesses, gifts and burdens. Being away on this vacation just gave me a moment to pause and reflect on the gift she is.

In Philippians 4, Paul writes that he has learned "the secret of being content" no matter his circumstances. I have been wondering throughout this long winter how I might learn this secret. I don't want to be someone who complains, who throws my cards across the room when I don't get my way, so to speak. I want to be someone who doesn't get exactly what I want and can move on, disappointed but content, ready to try again.

Just a few verses before Paul writes that he has learned contentment, he commands: "Finally, brothers and sisters, whatever is true, whatever is noble, whatever is right, whatever is pure, whatever is lovely, whatever is admirable—if anything is excellent or praiseworthy—think about such things" (Phil 4:8). And I wonder whether placing our thoughts upon all that is lovely and noble and admirable in this world, in the people around us, in the gifts that God has given all of us through one another, is the secret.

When Penny was first born, I never could have imagined how admirable she might become. But eight years later, I continue to remain grateful for how lovely she is, even in the smallest things.

Contentment; Disability; Down Syndrome
March 17, 2014 at 9:28 am
To add a comment you need to be a registered user or Christianity Today subscriber.

Anticipating World Down Syndrome Day: What I Admire About My Daughter

Anticipating World Down Syndrome Day: What I ...