Home > 2014 > March
Disney's Frozen: Not About Letting It Go After AllIt's about a princess who refuses to let go, out of love. 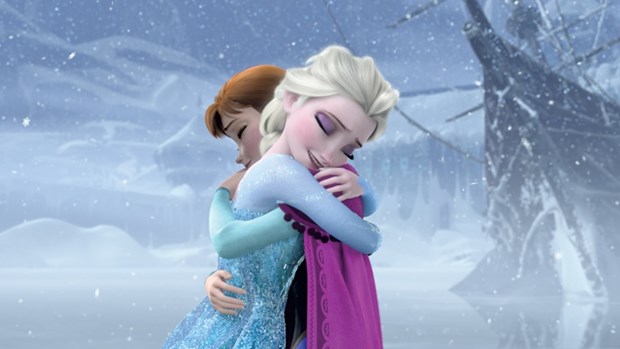 Peter and I took Penny and William, our two older kids, to see Frozen in the theater in January. I was nearly as excited as the children. I had read the endless praise, including the writer who called it the best Disney movie since The Lion King (which I saw four times in the theater back in 1994). Indeed, Frozen was great. I laughed at Olaf, the buck-toothed snowman. I hummed along with the ballads. I appreciated the way the story highlighted sisterly love over romantic love.

The kids loved it too. Penny, our eight-year old daughter, has been singing "Let It Go" ever since.

In case you haven't seen the movie, Frozen is the story of two sisters, Anna and Elsa, both princesses in the kingdom of Arendelle. Elsa, a figure loosely based upon Hans Christian Andersen's The Snow Queen, has been born with magical powers. She is taught to "conceal" these powers by wearing gloves and living a sequestered life, cut off from her delightful little sister and the rest of the outside world. Once those powers are accidentally unleashed, Elsa runs away from her kingdom. Anna runs after her.

Frozen just came out on DVD, so the tidal wave of excitement about the music, the story, the figurines, and sundry other associated products, has only continued. In recent weeks, I've heard from friends about how long they waited in line to get a copy. I've seen Facebook status updates about families snuggling up to watch it at home. Penny added a few other numbers to her repertoire after a playdate with a friend who had the soundtrack. To give you a sense of the size of this spectacle, it sold 3.2 million units on the first day of its release (March 18th). It has grossed almost $400 million dollars so far—and that's only the numbers for the domestic theater sales. Our family succumbed to the fever and ordered it "On Demand" for our kids over the course of a cold and rainy weekend.

Watching it for a second time, I was struck most of all by how antithetical to the film's overarching message is its banner anthem, which happens to be Penny's (and every other little girl in America's) favorite. "Let it Go" is performed by Elsa after she flees the kingdom and decides to unleash her power. She creates an ice castle in order to live out her days in lovely, freezing isolation. Meanwhile, she sheds the symbols of her previous confinement: her braids give way to flowing blonde trestles, her modest outfit to a more sultry dress complete with high heels, her attitude from one of demure obedience to rebellion. Even my three-year old nephew is singing this song:

Can't hold it back any more.

Turn away and slam the door.

I don't care what they're going to say.

Let the storm rage on.

The cold never bothered me anyway.

It's a great song, and as many a critic has noted, it will play well on Broadway. But it's not the point of the movie. At all. The point of the movie is the love between these two sisters, which ultimately allows Elsa to learn to use her powers for good. Yes, she needs to stop concealing/not feeling, but she also needs to come back to the responsibilities of her kingdom and learn to love. Anna, the estranged little sister who pursues Elsa at great risk to her own life, is the hero of this film. She is the hero because, out of love, she refuses to let Elsa go.

But the pop cultural takeaway from Frozen can be summed up by those three words: Let it go. As if all our problems will be solved if we just start being true to ourselves, throwing responsibilities and expectations aside.

A similar thing happened with The Lion King. In this story, a young prince runs away from his kingdom after the death of his father. He encounters some cute and amusing jungle animals, and they sing a fabulously catchy song: Hakuna Matata. I still hear people use this phrase, which comes from Swahili and can be translated "no worries." Twenty years ago, it was if the entire nation was relieved to hear that we shouldn't worry and should embrace this: "problem-free philosophy." But again, the song's message of shedding responsibilities is overturned by the movie's story line. The young prince, Simba, is confronted by his old friend Nala, who urges him to return to his suffering kingdom and face his responsibilities.

I'm not going to stop my kids from singing these songs. At the end of the day, these lyrics are parts of two movies with positive messages about family, responsibility, and love. But I am going to help my kids pay attention not just to the catchy tunes but to the story lines themselves. Moreover, I'm going to try to teach them to take responsibility for their actions, so that their real lives aren't defined by "Hakuna Matata" or "Let it Go," but rather by acting towards others in love.

Children; Entertainment; Family; Love
March 31, 2014 at 10:41 am
To add a comment you need to be a registered user or Christianity Today subscriber.

Disney's Frozen: Not About Letting It Go After All

Disney's Frozen: Not About Letting It Go After All