Home > 2014 > March
Kids Glued to Smart Phones? Wonder Where They Learned That...Parents need consider our own screen time before we worry about our kids' 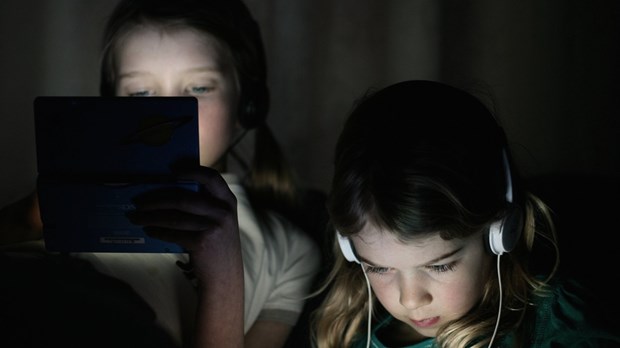 I left our pediatrician's office feeling somewhat self-satisfied. The doctor had asked for a report on my three-year old daughter Marilee's use of iPads, iPhones, and television. She came in under the American Academy of Pediatrics recommendations for hours of screen time given her age. He commended me.

But my sense of self-satisfaction was somewhat short lived.

First of all, I realized that much of my children's relative lack of screen time emerges out of the privileged lives they live. My husband and I can afford to pay for our three-year old to go to school while we work. We have a big backyard and plenty of opportunity (especially if spring ever arrives!) to play outside safely. I don't need screens when I have playgrounds and classrooms to keep them occupied.

The truth is, I allow my kids to watch pretty much whatever they want when it is convenient for me. Come Saturday morning, when I desperately want another hour of sleep, I routinely allow all three children to select whatever they want to watch on their own individual devices. I slumber on as Penny (age 8) watches Angelina Ballerina on the family computer, William (5), who has learned how to navigate our Netflix account, generally selects Wild Kratts or Jake and the Neverland Pirates on the tv, and Marilee (3) selects Caillou or Curious George on the iPad. I know, I know. Overpriviliged individualism run amok. (But the pediatrician said I was doing a great job!)

Secondly, even though I can read the AAP's policy about Media and Children and feel, again, relieved that my kids aren't staring at screens all day long, I am starting to wonder why I'm only counting their hours in front of a screen. I need to be counting my own, and especially the minutes and hours spent checking email, scrolling through the news headlines, and peeking at Twitter and Facebook in their presence.

I started to recognize my own negative screen patterns a few months ago. My husband Peter and I were putting the kids to bed. He had sung to Marilee. I read to Penny and William. Then we switched rooms. It takes all of five seconds to walk between their bedrooms and we almost collided in the hallway. Both of us were looking at our phones.

Then I realized that my right wrist is sore. So sore that I can't do a pushup without wincing. Wonder how that happened…

Finally, last week, we were having a family dinner. Peter went into the kitchen to heat up some soup. After a few minutes, William asked, "Where's Dad?" He snuck into the kitchen to look and came back to the table with his eyebrows raised. William caught my eye, inclined his head toward the kitchen and mimed two thumbs typing.

My kids don't have a problem with screen time. Yet. But their parents do. And we will pass along the dysfunction unless we deal with our own bad habits.

I read a lot about the dangers of children spending too much time in front of screens. In addition to the AAP recommendations, there's the Huffington Post blogger and occupational therapist who makes the case for banning all handheld devices for children under the age of 12. If you Google the topic, you can come up with reports from the Mayo Clinic, the National Institutes of Health, as well as a host of other reputable media outlets.

But I only found one report linking parental screen usage to detrimental affects on children, and it only came out this month. And this report itself seemed pretty basic and self-evident to me. Based upon 55 interactions of parents and kids in restaurants, researchers concluded that when parents spend their meals focused on their phones instead of their immediate environment (the kids and the food, that is), it causes the kids to engage in attention seeking behavior or to turn their own attention to a device. Shocking news, this.

I see this same pattern in our family all the time. Whether it's finding Marilee with a yoga mat pretending to have an exercise class and do situps like their dad or hearing my words come out of William's five-year old mouth: "one moment, please, Mom" or noticing Penny's inflection when she gets an answer to a question: "Ah," she says, with a quick nod of her head. Just like her mother. They do what they see us doing more naturally than what we teach them to do.

If I want my kids to learn how to use media and technology in a responsible and life-giving way, I not only need to be firm in our guidelines for their media consumption. I need to actually live out the same ethos. I need to leave the iPhone behind when we are eating meals together. I need to forgo the temptation to check my messages at a red light with the kids in the back seat. I need to keep technology in its place in order to make sure that it serves our family rather than feeling as though I serve it.

And we parents need to be talking, not about our kids' screen time, but about our own.

Media; Parenting; Technology
March 24, 2014 at 11:23 am
To add a comment you need to be a registered user or Christianity Today subscriber.

Kids Glued to Smart Phones? Wonder Where They Learned That...

Kids Glued to Smart Phones? Wonder Where They Learned That...