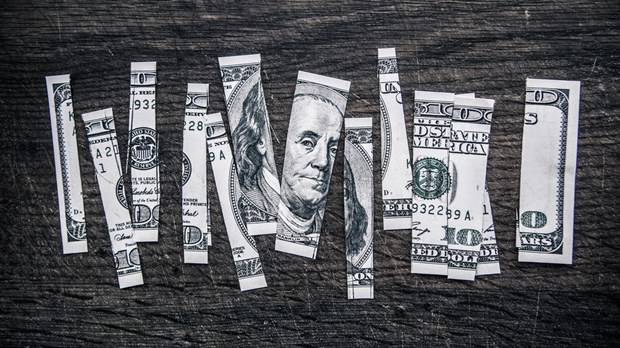 I am packing to go on a short vacation with my husband. I have been thinking about this time away all winter—three nights for just the two of us in Florida when I join him on the end of a business trip. Three days of sunshine. Three days of walks on the beach and calling our children just to say hello and sleeping in and eating out.

I open the closet that holds last summer's clothes—skirts and sundresses and brightly colored tops. I pull out a dress I bought in January. It was a bit of a splurge—I didn't need it. There was a foot of snow on the ground and I saw it hanging in a store window and I was thinking about the upcoming vacation, and I decided to go for it. It has been hanging in my closet for two months. But when I try it on again, I realize it isn't that great. A little bit frumpy, in fact. Not nearly as lovely as it had seemed in the store. Certainly not worth a splurge. I don't end up packing it. I don't know if I will ever wear it at all.

My mind goes in two directions. One, I start beating myself up. I should have known better. I should have been more careful. I shouldn't have tried it on in the first place, knowing that I have a closet full of perfectly good clothes and don't need any more. I should have saved that money or used it for better ends. Two, I start justifying the decision. It has been a really long winter. It has been four weeks of constant snow days, sick days, ear tubes for Penny, a sinus infection for me, a stomach bug that knocked all three children out. We aren't going to miss the money. It wasn't that expensive. Maybe I'll wear it another time.

It finally hits me. I also could just repent and get on with it (as I wrote about last week).

It seems almost silly to confess the sin of an irresponsible dress purchase. (I had to edit that sentence multiple times because I was inclined to put either confess or sin in quotation marks, as if those words were too weighty to address this reality.) But here's the thing. Confession is my only way out. My natural inclinations—beating myself up and justifying myself—lead me away from God and towards myself, whether with a sense of shame or of superiority. But naming the decision for what it was—a poor choice, plain and simple as that—and laying that poor choice before God with the words, "I'm sorry," brings peace to my heart. Peace and freedom and restored relationship.

In and of itself, buying that dress was no big deal. But layer years of similar decisions on top of that one, and you find a twisted soul. You find someone who has forgotten the freedom of entrusting her finances to God. I want to become someone who is careful and wise with money—someone who splurges at times, with freedom to enjoy the richness of the material world, someone who has the wisdom to deny immediate desires at other times.

I have ignored or forgotten confession as a spiritual discipline for many years, in large part because my sin seems minor to me: an extra glass of wine here, a careless splurge there, a half an hour looking at email instead of reading to my child, ignoring the whisper to write a note to the person on my mind today, forgetting to pray.

God cares about my small sins not because he is a tyrannical cosmic policeman but because he knows that the daily decisions—about clothes and food and time and what tone of voice I use—are incremental steps that form and shape my soul, my heart, my inmost being. These actions that seem inconsequential to me are of the utmost consequence in who I am becoming.

I'm sorry I bought that dress. I'm thankful that God forgives me.

Financial Stewardship; Lent; Spiritual Disciplines; Spiritual Formation
March 12, 2014 at 10:02 am
To add a comment you need to be a registered user or Christianity Today subscriber.