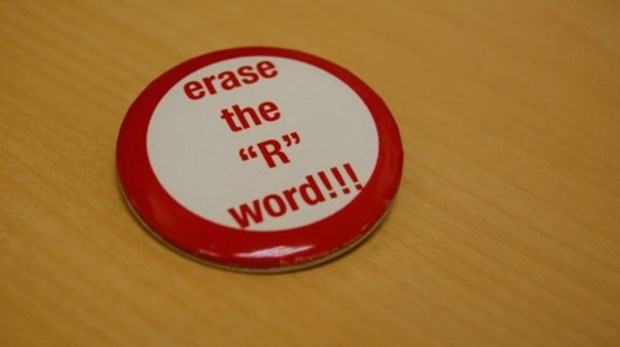 A few weeks ago, Jerry Seinfeld appeared on The Tonight Show. His five-minute comedy set included a joke comparing inept postal workers to the "mentally handicapped." (See Mark Leach's gracious post about this incident for more information and analysis of it.) Seinfeld didn't use the "R-word." But his attempt at politically correct language still used people with intellectual disabilities (ID) as a punch line.

Seinfeld isn't alone. Other comedians routinely mock people with ID, whether by using the r-word itself or by jokes about the "short bus" or the "special" ones. It's not just comedians. I'm sure you've heard these words used as jokes or as self-deprecating remarks or as putdowns levied at someone who has made a mistake.

Beyond comedy and insults, people with ID are also the subjects of discrimination in our courts, our public spaces, and our workplaces.

Perhaps you already know about Ethan Saylor, the young man with Down syndrome who died of asphyxiation after being wrestled to the floor by three plainclothes security guards? Saylor had refused to pay $10 for a ticket to watch Zero Dark Thirty a second time.

Perhaps you already know about the young woman with Down syndrome who was raped and whose rapist was convicted by a jury and then released? The judge concluded that the young woman didn't "behave" like a victim and ordered a new trial.

Perhaps you've heard that people with ID are not required by law to receive even the minimum wage when they work? Dan Berry, writing for the New York Times offers a chilling example of this commonplace abuse of labor in a new article, "The Boys in the Bunkhouse":

The "r-word" didn't start out as a slur. It started out as a medical term, intended to replace other words that had become derogatory like idiot, imbecile, and moron. If we end the use of the r-word without ending the attitude that accompanies it, we will simply end up with another term of derision for people with intellectual disabilities. Seinfeld's joke about the "mentally handicapped" is but one case in point.

So what can you do not just to end the word but end the negative attitude toward people with intellectual disabilities?

On a personal level:

--If you use the "r-word" or any other words related to disability as negative comments, first apologize. Then stop using the words. Don't make excuses. Don't pretend your words don't have anything to do with the real people out there with ID. Don't come up with linguistic rationales. Just stop. (If you want to read more on this topic: The R-Word and the Courage to Say I'm Sorry) And then…

--Befriend someone with an ID. Look for local organizations like the ARC, Special Olympics, or Best Buddies for opportunities to meet people with ID. When you are personally invested in someone's life and you love them both by giving to them and receiving from them, your attitude will change and your attitude will then spill over into other aspect of your own life. Maybe you'll even end up running a marathon or writing a book together!

--If you are a parent of a preschool or elementary school child, invite the child in your kid's class who has an ID over for a playdate. Kids with ID often have a harder time making friends, and yet they long for friendship. Imagine how your child's attitude towards people with ID might change by forming real and lasting friendships. (For more on this topic, read a series on this blog about Disability and Friendship)

On an institutional level:

It's a cultural shift that needs to happen both personally and institutionally. We need legal, political, social, medical, and individual change. And as much as the government and medical establishment and media powerbrokers might seem out of reach, this change can and will happen as individuals do their part to ensure it.

What more do you see that we could do—personally and institutionally—not only to end the word but to end the attitude?

Disability
March 10, 2014 at 6:04 am
To add a comment you need to be a registered user or Christianity Today subscriber.

Why Ending the R-Word Isn't Enough

Why Ending the R-Word Isn't Enough