Home > 2014 > May
How Sex, Busyness, Mobility, and the American Dream can Impede FriendshipHouse of Cards, my kids, and a Tedx talk all got me thinking about the nature of friendshipAmy Julia Becker 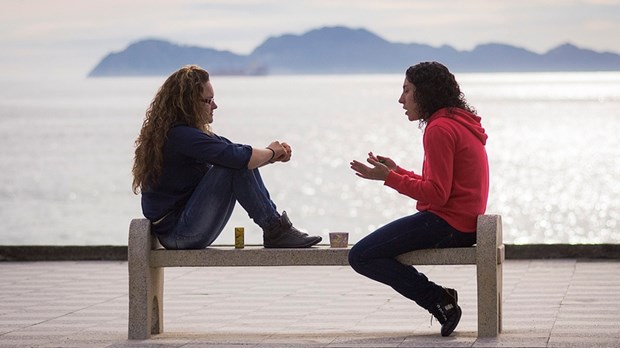 I've been thinking about the nature of friendship.

It started, oddly enough, with House of Cards, a show in which no one has any true friends. But as the season progressed Rachel—a former call girl who is trying to keep her head down and create some stability in her life—was befriended by Lisa. Lisa invited Rachel to The Fellowship, and Rachel seemed to finally feel safe, accepted, even loved in this low-church environment. She worked with some kids at the daycare there. She started reading the Bible. Soon enough, Lisa moved in with Rachel, and I started to hope Rachel might find healing through that friendship. Instead, the two women fell in love, and from there the friendship became a relationship between two lovers.

In a show that has not portrayed any lasting friendships, it was disappointing to see this relationship move in the same direction so many others already had, to physical intimacy and the dissolution of their relationship (due to the jealousy of another character on the show, not to anything negative that happens between the two women). I wonder what it would have taken for this show to develop a friendship over time, paying sustained attention to these two characters as they grow up together and love each other with agape love instead of moving to the bedroom.

Sex is quick and alluring. Friendship is slow and quiet.

Maybe it's hard to portray friendship on tv.

And then, in an unrelated incident, I started worrying about my kids' friendships. It started when I realized how many times we have had friends from our oldest daughter Penny's class over to our house and how few times she has been invited over to other people's houses. That first concern opened a cavern of doubt and question in my brain for our whole family: Will William ever have good friends who are boys? Does Penny really have friends from school or are they patronizing her? Should I be arranging more playdates for Marilee? Will they ever have sleepovers? Will they feel like they belong? Will they be happy?

But it's hard to make these relationships happen. We have ballet and piano and Acro class. I work three afternoons a week. Playdates take energy and coordination and time I don't have.

Maybe friendship is hard when life moves so quickly.

And what of my own friends? I've moved up and down the east coast for the better part of my life, leaving close friends in my wake as they have settled down more permanently. There's my "best friend" from college who lives in Colorado, my closest friends from my first job out of college living in Los Angeles and New York City, my best friend from our time in Virginia, my best friend from our time in New Jersey. I already have good friends here in Connecticut, for whom I am quite grateful, and yet as we end the second year of our time here I'm aware of just how hard—whether for my kids or for me as an adult—it is to make and sustain friendships, true friendships, friendships that last.

Maybe it's hard to make friends when you live in a mobile society.

Finally, I watched a TEDx talk given by a friend of ours:

I highly recommend watching the full sixteen-minute talk, but for those of you who want the recap, Danny and his wife (who, full disclosure, are close friends of ours—my husband was one of Danny's roommates in college) moved into a low-income neighborhood in Richmond, Virginia. It was an unexpected move for this highly educated couple (Danny is a doctor and now the Deputy Director of Public Health for the city of Richmond, Mary Kay is a teacher). It was an unexpected move, as Danny explains in his talk, for the son of Indian immigrants. Danny mentions his father's dismay: "I worked my a** off to get out of poverty, and now you're moving back there?!?" It was an unexpected move for anyone who has grown up with the notion of the American Dream.

But Danny and Mary Kay moved into this neighborhood alongside three other couples, not because they wanted to be commendable do-gooders but because they wanted to live with their friends and live out their friendships in a way that would bless those around them. Ten years later, as Danny attests, not only have those friendships grown but living in a neighborhood that is not pursuing success and independence has also challenged his understanding of how friendship happens. It happens when you linger, he says. When you share. When you need one another.

So maybe independence, self-sufficiency, and success make friendship harder too.

Friendship happens when we stay put. When we slow down. When we work side by side towards the blessing of our community.

In other words, friendship is countercultural. But friendship is also a promise. Whenever I worry about my children's friendships, whenever I bemoan the long-distance nature of so many of my own friendships, and whenever I realize how hard it is for so many of us to maintain and sustain true friendships, I am brought back to Jesus' words in John 15:15: "I no longer call you servants. Instead I have called you friends."

Jesus holds out the possibility, the promise, of friendship with God. Of a permanent, rooted, stable, agape love relationship built as we work together to serve and bless others in this broken world. It's a promise I long to know even more fully in my own life and for my children. A promise I hope we will live out in our family, in our church, and in our community. Slowly. Quietly. With neediness and brokenness and love.

Friendship; Pop Culture; Television
May 15, 2014 at 8:49 am
To add a comment you need to be a registered user or Christianity Today subscriber.

How Sex, Busyness, Mobility, and the American Dream can Impede Friendship

How Sex, Busyness, Mobility, and the American ...