Home > 2014 > May
I Didn't Grow Up Until I Became a MomI thought I was a mature adult, and then I had a babyAmy Julia Becker 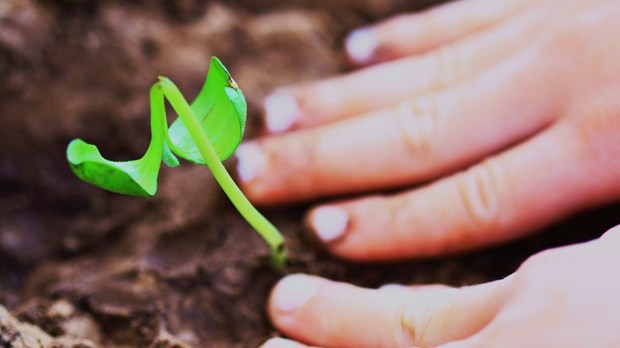 I should begin with two caveats: One, I'm not all grown up yet. Maybe I never will be. Two, many of my peers who aren't parents are just as grown up as I am. But for me, having kids is what it took for me to begin to grow up, and as Mother's Day approaches, I'm considering all the ways having kids has changed me for the better, even though the past nine years of pregnancy and childrearing have been the most humbling, exhausting, and at times desperate of my life.

When I was in my twenties, older people often referred to me as wise beyond my years. I took silent pride at the thought they must be right. I was responsible, hard-working, accomplished. At the same time, I tended to roll my eyes a bit at my fellow Generation Xers who were delaying marriage, just as I have felt critical in recent years when I read reports about Millennials who put off adulthood by living at home, staying on their parents' health insurance, bopping from job to job. But in many ways, I was doing the same thing, just with a more outwardly "responsible" guise. I looked like a grown up—married, employed, homeowner, and all by age 23—but I also wanted to avoid the encumbrances (aka children) that would tether me, commit me, hold me in place.

I was scared of having kids. Scared of what they would ask of me. Scared of not working as much. Scared of surrendering my body. Scared of sleepless nights. Scared of turning a marriage into a family.

But in our late twenties, my husband Peter and I started inching towards pregnancy. Three kids later, it turns out I was right to be worried. Becoming a mother has made my life harder. It has unraveled me. And it has started to grow me up.

I used to sometimes choose to be "selfless." I would bring meals to people who were sick. I even spent a few months helping my mother-in-law after her cancer diagnosis. I worked for a parachurch ministry with high school students. But all those acts of service were on my own terms, and they mostly came with external accolades.

Then I had a baby. And I had no choice but to give of myself to her. She offered very little, other than more needs, in return. Even eight years later, with kids who are out of diapers and rarely wake up in the middle of the night, I still have no choice but to help them a lot. In a moment of unfortunate peevishness a few weeks back, I snapped at William after he refused to pick a dropped fork off the floor: "William, make a list of all the things I've done for you today. I put toothpaste on your toothbrush. I checked to make sure your bottom was clean after you pooped. I cut your fingernails. I made your breakfast. I helped you pick out your shirt. I put your dishes in the dishwasher and started the laundry with your dirty clothes. I--"

He interrupted me. "I got it, Mom." He picked up the fork.

I don't serve my kids because I'm making some beneficent choice to do so. I serve them because I have to. Because they need me. Because I'm their mom. And those acts of involuntary service have helped me let go of my self-importance, at least a little bit.

Then there's control. Having a child with Down syndrome knocked me out of any illusion that I could control my children's future. Having two typical children stripped away any pretense that I could control my children's present. Snow days, sick days, tinkle accidents, skinned knees—they have all helped me hold my time a little more loosely, live with a little more grace for myself and for others.

Finally, there's my spiritual life. For the first few years as a mother, it felt as if a tornado had picked my spiritual house off the ground and spit it back out in pieces. I could find a remnant of prayer over here, a memory of a Bible verse over there, a longing for a meditative walk in the woods strewn across the floor. This faith that had seemed so unbreakable appeared to be in shambles. Pieces and shards that didn't hold together anymore.

But now, with the perspective of almost a decade of parenting, I can see that I was torn down only to be rebuilt. And this new house is a more spacious one. With room for conversations with Marilee on the way to the post office: "Mom, I would like to be God." "Oh really?" "Yes. Acuz then I could just hang out in people's hearts all day." Space for singing hymns to William as he falls asleep. Openness to prayer in the middle of the night, when Penny wanders into our room at 3 a.m and says, "Sit with me until I sleep?" Room for a church family. Room for humility and grace and peace and—still only sometimes—patience. Room for watching birds out the window at our new feeder and sharing my children's delight when we spot a new flash of color. Room for finding God, being found by God, in times and spaces I never before imagined.

I'm still not all grown up. The years of parenting ahead will certainly offer their own set of challenges. Their own sleepless nights and wrestling with God and anger and sorrow. Their own grace and goodness and hope and joy. But maybe this re-formed self of mine will be able to receive what is coming with a little more maturity, a little more humility, a little more openness, a little more grace. Maybe I will keep growing up.

Family; Motherhood; Mother's Day; Parenting
May 05, 2014 at 11:53 am
To add a comment you need to be a registered user or Christianity Today subscriber.

I Didn't Grow Up Until I Became a Mom

I Didn't Grow Up Until I Became a Mom